“Pinos loquentes semper habemus” is the motto of Bowdoin’s Peucinian Society, a literary society at the College since 1805. “We always have the whispering pines.” It’s an attractive image, but in the past couple weeks, I’ve thought that more fitting would be a version proclaiming the perpetuity of not the old pine forests but of the weeds. 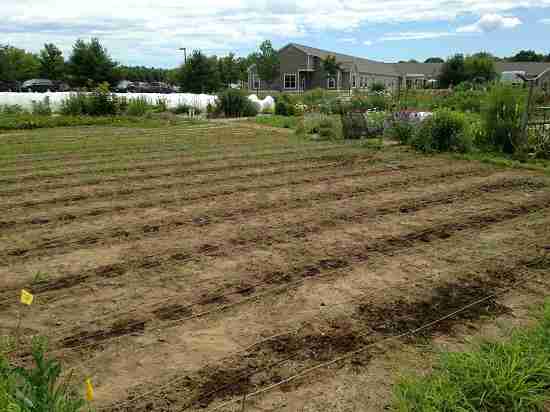 The crabgrass, the milkweed, the purslane: these are the real ecological constants of the region, as far as I can tell. Of course, I’m only out in the community garden for a handful of hours in any given week, but that’s been plenty to get a feel for the insidious progress of the weeds, creeping up innocuously enough until suddenly they far outnumber and outweigh the carrots in any given row.

Incidentally, in attempting to adapt the original Latin motto with a word for “weed,” I found that the Latin alga—as in the singular form whose plural is algae—can be translated not only as “seaweed” but also as “uncountable stuff,” according to William Whitaker’s Words. Fitting enough for this purpose. 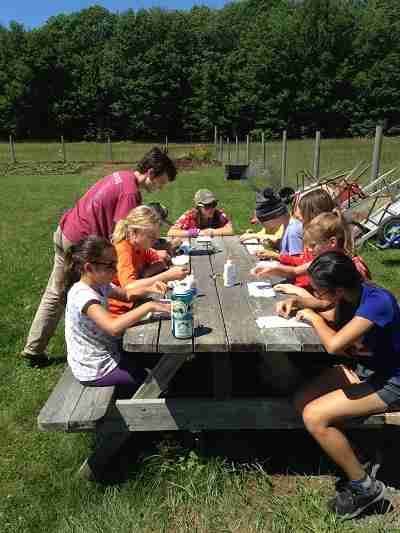 In my time in the garden this past week, I helped introduce a group of eleven pre-teens to the weeding world. A trip led by Apogee arrived at the garden for a morning of volunteer work, and quickly found that as they finished each task, we could invariably find another plot to weed, another squash plant needing to be freed from the clutter around it. The Apogee kids were generally more excited about using the wheelbarrows than crouching over the weeds, but some of them were also vocal about the satisfaction of tearing up grasses with a scuffle hoe.

We took a break for snack after the first hour, and brought out two quarts of strawberries purchased from Fairwinds Farm, of Bowdoinham. Initial excitement turned to amazement as the kids ate. “I’ve never seen such a red strawberry!” one boy proclaimed, holding one up to admire it. “I wish they sold them like this at the store.”

After another work shift, we all took a walk to the labyrinth in the woods, where the Apogee leaders convinced the trip participants to keep silent while walking the route to its center. On the walk from the garden, they learned tidbits from Margaret: the low bushes alongside the path on one stretch would eventually bear blueberries, and the fallen oak twigs and small branches were down on account of the squirrels that had chewed them off for easier acorn access. 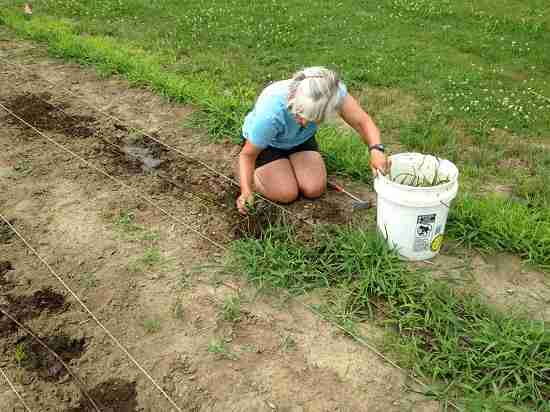 At noon, the Apogee kids were ready for lunch, and I was due to for an afternoon of chainsaw work with Margaret and Connor, so we all headed out. Next time I spend a morning in the garden, I’m sure new weeds will be popping up in every spot any of us has cleared so far.

But after an hour or two, looking back down that row of carrots—the individual plants in each of which you’ve carefully held in place one by one, so as not to unearth them as you coax a grass root from a spot half an inch away—is undeniably satisfying. Each sprout is visible, thin stalks not shunted one way and another by hardy crabgrass stems. It really does look like they can breathe.

Katie Morse-Gagne is a Bowdoin student from New Hampshire and and Mississippi, majoring in Environmental Studies and English and working at the Land Trust for the summer of 2018. She has been working on a variety of projects ranging from researching the history of Crystal Spring Farm to harvesting strawberries at the Common Good Garden and helping to design a comprehensive Mid Coast trail guide. She is also a leader in the Bowdoin Outing Club and is excited to spend some free time this summer on hiking trails and whitewater, and finding good wild blueberry spots.