by Charlie Spies, BTLT Board of Directors

Despite the never-ending snow flurries and the current isolation of most of our human loved ones, spring is truly here and the natural world is in high gear.

An example of this is to be found on the blueberry barrens of BTLT’s Crystal Spring Farm.  They are far from being truly barren and the lowbush plants will soon be pushing out leaves and flowers.  There are many beetle species that inhabit blueberry barrens. Here is some background on three that are fairly easy to spot now and through the summer – if you know what to look for. 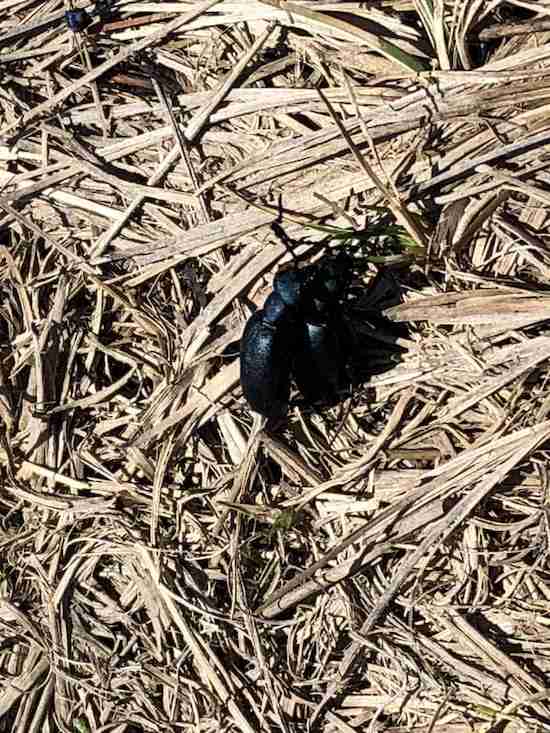 Right now, when the sun is out, you may see some beautiful metallic green beetles in the duff along the sandy roads of the barrens.  The picture at the right was taken on April 13th and I saw at least a dozen others.  These guys are about an inch long and don’t care to get out of your way.  Try not to step on them and most definitely don’t pick them up. The reason they aren’t worried about you is because they have evolved a defense mechanism that keeps most other animals away.  They can give you a little squirt of acid if bothered. This little trick is why they have come to be known as Blister Beetles. Pretty to look at but armed and ready should you harass them! Click here for more on these interesting bugs.

As things warm up enough for us humans to believe that summer will actually come again this year.  You may spot another metallic green beetle along the same sandy roads of the barrens. They are also about and inch long and like to be in the sun.  But unlike the Blister Beetles, they are really good fliers and will take off ahead of your approach and usually land again several yards down the track.  They don’t have the ability to give you a blister but if you are fast enough to catch one, it might give you a good pinch. Hence the name Tiger Beetles. Again, beautiful, but like most beautiful insects in plain site, they have a means to defend themselves.  Tiger Beetle grubs, also called larvae, will grow to become the flighty adult version but when young they will be found along the roads living in the sand. They live under but near enough to the surface to quickly strike at and grab other unsuspecting insects that may wander near enough to make a meal. Click here or here for more on both the adults and their cute kids.

A third beetle that is out on the barrens and just about anywhere else you see white pine growing is the White Pine Weevil.  You will probably never actually see this bug because it spends most of its life inside the bark of white pines or spruce trees.  But you can easily spot their presence as spring turns into summer. This weevil lays its eggs at the base of the spring shoots at the top of white pines, just when the tree is creating a new leader or top shoot as it reaches skyward to maximize its ability to capture sunlight among its neighboring trees. This leader is also called a “candle”, probably due to its shape as it grows up to a foot or more on top of the tree when conditions are favorable. The weevils look for “candeling” pines in the spring as a nice soft and succulent place to lay the eggs that will hatch into weevil larvae.  The larvae then feast on the growth of the year before and prevent a new candle from forming. This is good for the weevils but not so good for the shape of the pine. You will know weevils are in a pine when you see the candles turning brown and wilting as summer progresses. The weevils typically kill the leader shoots and force the pine to produce side shoots that then grow up around the dead leaders. 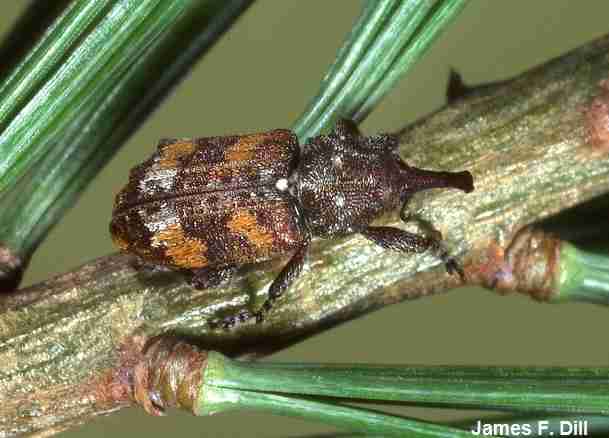 This doesn’t kill the pine, but In open growing spaces, like the edge of the barrens, these side leaders are created year after year and the pine tends to grow as much sideways as it does upward.  The weevil’s work is why field pine are often a jumble of stems rather than the straight columns we think of for the Bowdoin Pines and other stands that have grown into the spectacular trees we know so well in this area. These big straight pines avoided the jumble by growing very close to one another when young. Even though these trees were often weevilled, they were forced to grow straight and tall by the crowding and shade competition created by their neighboring siblings. Look for those browned out candles when walking around town or on the barrens. You won’t see the weevils but you’ll know they are right there, just under cover.  Click for more on white pine weevils.

Next time you head to enjoy the barrens, hills, and woods of Crystal Spring Farm,

keep an eye out for these beetles and so much more.