Tag Archive for: the crossing 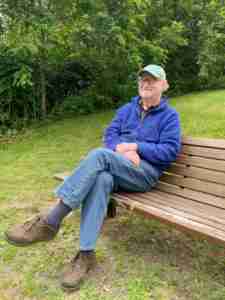 I recently had the pleasure of having BTLT Board Member Doug Bennett walk me around a very special parcel of land right here in Brunswick, Maine. We met at 250th Anniversary Park on an overcast morning, where he shared with me its rich architectural history, unique biodiversity, and a checkered past.

I parked across the street in the mill parking lot, carefully crossed the busy road leading to the old green bridge, and found my feet on a grassy patch of open space. Beautiful flowers were planted around the property and the view of the Androscoggin was spectacular, yet upon first glance it truly appears to be a fairly forgotten little piece of land.

The 1.5 acre park is located just below the Brookfield Renewable Energy hydroelectric dam on the bank of the Androscoggin River. It was purchased by the Land Trust, and given to the Town of Brunswick with an easement retained. If you google 250th Anniversary Park, you will find minimal information. Mostly directions, its primary uses (scenic overlook; bird watching; picnicking; fishing), etc.

Doug appeared as I was scampering around taking photos of bugs on the flowers; we exchanged pleasantries, then sat down on one of the park’s benches.

He explained that in 1989 the town decided to designate “this little pocket of a park with a gorgeous view of the river” as ‘250th Anniversary Park,’ celebrating the founding of the town in 1739, the year the Massachusetts General Court approved Brunswick’s incorporation. However, what was a victory for white settlers in 1739, represented a traumatic loss for the Native people whose livelihood and vitality relied heavily on access to the Androscoggin. 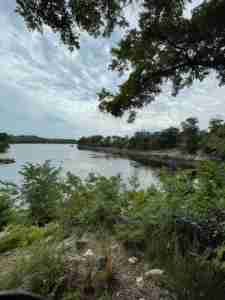 As we walked a bit further into the property, we came across a small bronze plaque that read “Historic Site: When the Abenaki were the sole inhabitants of this land, the water here was called Ammoscoggin. The word means ‘Fish coming in Spring.’” Doug stared at the plaque with disappointment as he continued to share more of this land’s true past.

“This is just such an important site that you can look at and say ‘well, it’s a pretty empty place, where you see the river’ but if you have a historical imagination [you can see] the whole history of the passage of time: the pushing away of the Wabanaki, the coming of white settlement, and the building of many small mills right on this plot of land. For a long while there was no bridge, and then the building of a bridge…” Not to mention the dam – which was essentially a death sentence for the Native communities who fished its waters. Doug hopes that one day, we can more fully honor the creation of our current towns, including the seasonal Native American encampments that were here long before us. 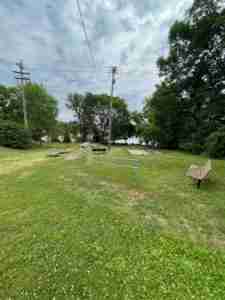 The very land that our feet were standing on was the “epicenter of the coming of two towns, and the crossing between them,” says Doug. It was a reflective moment looking out to what once was a thriving river with abundant salmon, shad, sturgeon, and alewife, lush forest along the water’s edge, and the Wabanaki coming to fish and trade. I was trying to imagine the conflict that raged on for years between the settlers and the Native people, the building of the dam, and the development of lumber mills. I looked at the Seadog Brewery, mills filled with art galleries and office spaces, and a bustling bridge with cars zooming by. We commented on how every piece of land holds a story, encompassing both triumph and loss. 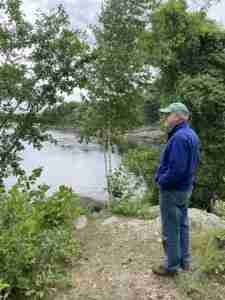 Taking a step away from the historical significance of 250th Anniversary Park, we took some time to acknowledge and appreciate the biodiversity that exists there. Doug and I watched the river intently waiting for the massive, prehistoric-looking sturgeon to leap like “polaris rockets completely out of the water to clear their gills.” I shrieked with glee (my first sturgeon experience) as Doug chuckled at me saying “Welcome to the Crossing!”

Doug told me some of the birds we may come across at the Park include osprey, eagles, kingfishers, great blue heron, and ducks. He shared that back in the day, when Maine’s economy was reliant on the paper industry, the Androscoggin River was horrendously contaminated. “Some of the older folks in town will say that it was so dirty, that crossing the bridge you’d have to cover your nose, the stench was so bad,” says Doug, “You’d have to repaint your house every couple years, because the acid from the river would peel the paint!” At the time, US Senator Ed Muskie began to realize that the future of Maine was in recreation, not paper. In an act of political courage, he switched from supporting the paper industry, to becoming a floor manager to pass the Clean Water Act in 1972. Today, the river is a bit cleaner than it used to be, though it still needs a lot of work. Click here for some photos of the river from the 1970s.

“The Crossing,” as Doug calls it, has an incredible untold story that he, and now I, believe is worth telling. If you’re interested in reading more about its history, Click here to read Doug’s full written piece.