The morning of Friday August 5th I headed out to Crystal Spring Farm to witness something truly exceptional.

As I walked through the forested trails, the trees provided great shade on one of these hot summer days we’ve had so many of. I rounded the corner, to what opens up to the blueberry barrens. It doesn’t look like much, but I knew it held a deep history, unique ecology, and great potential for giving. 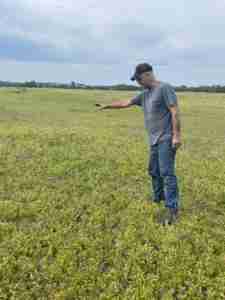 These fields have existed for thousands of years, with the blueberry plants living deep beneath the ground, sending shoots up to the surface each summer.

What I stood upon was a Sandplain Grassland – a natural ecological community ranked as “critically imperiled” by the Maine Natural Areas Program. The 21 sandy acres that are part of Crystal Spring Farm were deposited by rivers of glacial meltwater about 13,000 years ago, and are superb for the growth of low-bush blueberries, among other unique plant species. Since conserving the blueberry barren, BTLT has conducted two controlled burns to support the grassland vegetation and rare species that depend on this imperiled habitat. The most recent burn in spring 2021 on 14 acres of the blueberry barren proved to be extremely beneficial, as the wild blueberries are thriving this season! 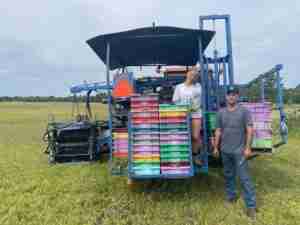 Even before I truly entered the barren, I could see multiple families crouched over with containers in their hands, and smiles on their faces. Both families remarked at just how abundant the fields were this season! But the true reason for my visit was a bit further past the “no blueberry picking beyond this point” sign. Lured by the sounds of a tractor, I made my way over to Seth Kroeck of Maquoit Wild Blueberries/Crystal Spring Farm and BTLT summer intern Cora Spelke who were hard at work harvesting crate after crate of blueberries.

During one of his daily walks earlier this summer, Seth, who leases the land abutting Crystal Spring Farm for organic commercial blueberry production, noticed that the blueberries that had been recently burned were looking good – really good. Blueberries (and fruit) are far less frequently donated to food banks and folks who are food insecure because of their short shelf life, high commercial value that many farmers depend on, and the fees that come with processing and freezing fruit to preserve it. While looking at the bumper blueberry crop at Crystal Spring Farm however, Seth saw an opportunity to bring together organizations to harvest and donate blueberries from just a small portion of the barrens at Crystal Spring Farm while still leaving plenty of the delicious berries for wildlife and the community for u-pick. 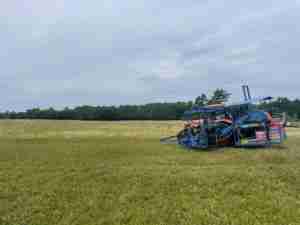 Working in 60 inch passes, the tractor grazes along the wild landscape harvesting blueberries.The organic average for harvesting is about 1,000 pounds per acre.

Due to the impressive bounty of berries this season, Seth’s objective was to mechanically harvest as many pounds as they could by mid-day from 3.5 acres that were set aside by BTLT for donation. By the time I arrived, they had been out there for an hour or so, and already had quite a few crates filled with blueberries. Seth predicted they’d harvest at least 2,000 pounds by the end of the day. Once harvested, the crates would be packed up and sent to a hub in Union, Maine where they would be consolidated. Next, off to be processed and frozen in Ellsworth, via Merrill Blueberries. After their long journey, these blueberries will be donated to families and individuals experiencing food insecurity through Good Shepherd and Preble Street as well as to Indigenous communities throughout Maine. 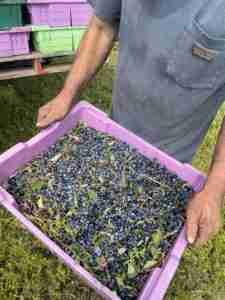 Each crate weighs about 22 pounds – during the consolidation process, about 13-15% of that weight is lost due to finding smashed berries, sticks, leaves, etc.

It was quite a sight to see – just a few folks, one tractor, and acres of hilly-landscape with the potential to feed. The very next day, I received an email from Seth informing me that they completed the task around 4:00 pm, with a whopping 4,655 pounds harvested! It’s an amazing cycle to ponder, from the burn, to new growth, to prosperity, to sharing. What an incredible natural landscape we have the honor of tending to and caring for, and the land returns the favor ten-fold. 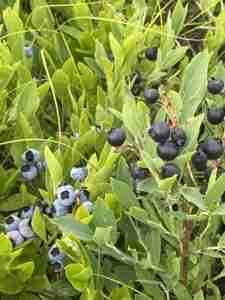 The different shades, sizes, and flavors of berries are different variations of the plant being expressed in slightly different ways.

We all noticed it during spring walks. The leafing-out looked vigorous, promising, and then the flowers came. My inner bear keeps instinctive track of the little white bell blossoms that signal blueberries-in-the-making. Walk here waddle there, in the spring wherever I see clustered white, the site goes into my berry-memory. I’ll be back, I say, amusing myself mildly with Arnold-speak.

That was the scene this spring at the north end of Crystal Spring’s sandplain grassland barren, which the Brunswick-Topsham Land Trust burned over in April 2021. Everywhere on those 14 acres, tiny fists of white speckled and, in some places, bent, the resurgent blueberry bushes. In a lifetime of blueberry tracking that’s verged on worship, I’d never seen such flower density.

Retired Bowdoin College Ecologist John Lichter helped me understand the gifts of a controlled burn. Bushes, like most of us, seek balance — what’s above the surface should roughly match the root network below. When a burn removes much of the bush and the competing weeds above ground, what remains draws upon a root system that teems with nutrients; growth aiming for balance can then be explosive.

Dial forward to July’s second half: Berry promise has become berry bonanza. I’m back! So too, given the Trust’s invitation to pick on some of those 14 acres, are many of you.

What’s also drawn me out on this late July day is something larger than my own berry-mania. It’s the promise of watching part of a blueberry harvest on 35 of 70 leased acres of sandplain that adjoin the acres preserved by the Land Trust. Those acres are cultivated by Crystal Spring farmers Seth Kroeck and Maura Bannon, and each year, thousands of pounds of blueberries get raked up and sent to Merrill Blueberry Farms, an organic processor in Hancock. There they are cleaned and sorted, and then frozen and shipped back to Crystal Spring and the farm’s freezer.

From there they go out to markets and restaurants throughout southern Maine. These commercial blueberries and products made from them are an important part of what makes Crystal Spring Farm a thriving operation.

Kroeck’s explanation of their berrying brought me to think more fully about the plants offering me (for that’s how it looks as I bend to pick) their berries. As he noted, “These berry plants are likely much older than I am, and they are likely to be here long after I’m gone.” Blueberry plants, Kroeck explained, “grow in circular clones from underground root networks that can be up to 50 feet across. Seen from the air, the barren sometimes looks like a patchwork of different-colored circles.” A sort of large-scale pointillist’s dream, I thought as I imagined this.

“And,” Kroeck added, “in the past, people wondered how these old fields just gave and gave.” Yes, the usual post-harvest mowing or burning added back some nutrients and encouraged regrowth, but the giving surely outweighed the getting. Enter the discovery of mycorrhizal fungi that partner with blueberry plant roots, increasing their reach and breaking down minerals for them. Blueberry plants, in symbiotic return, provide the mycorrhizae with carbohydrates.

So much going on beneath the surface. Another lesson, I reminded myself, in learn from your land.

Crystal Spring Farm’s 10-day blueberry harvest started on July 26. At midday on the 27, I stopped by to watch. Kroeck was driving the tractor with its two harvesting drums attached to the left side; his son Griffin was working a deck on the back of the tractor, where the just picked berries arrived via conveyor belts and dropped into a box that holds roughly 20 pounds of berries. Griffin tended each box as it filled, removing sticks, wads of grass and leaves — and the occasional snake — then stacked the boxes on wooden pallets. Kroeck drove carefully at somewhere under .5 mph. And the harvesting drums, which feature 12 rows of slim tines, raked the berries off efficiently. Following along in their wake, I saw few remaining berries and no evident damage to the plants. “Yes,” said Kroeck appreciatively, “the folks who invented these are pretty remarkable.”

Coda: The Gift: Earlier in July, while looking over the berry-bounty of the recently burned acres, Kroeck and BTLT Stewardship Director Margaret Gerber, thought, they are so many; some of these berries could help nourish those who are hungry. Kroeck volunteered a day’s harvesting, which he estimated could add up to 2000+ pounds. These berries would then need processing and freezing and distributing. In Auburn, they found the Good Shepherd Food Bank, which could oversee the processing and storage and, in Portland, the Preble Street Food pantry, which could distribute the berries. A fitting tribute to Crystal Spring Farm and the land’s stewards, and a berry fine use of a season’s bounty.