We’ve all been on a walk outdoors and enjoyed the sounds of birds chirping and singing. Some of us may be able to identify certain species. And some of us may even be able to identify the call of a bird we hadn’t heard in decades, stopped at a stop sign at an intersection. That’s exactly what happened to Brunswick resident Gordon Smith earlier this summer.

Originally from Massachusetts, Gordon has been a birder his whole life. His father was a birder, and would take his wife on frequent bird walks. Gordon joked that he first began to learn bird calls from inside his mother’s womb. His love for birds continued throughout his life as he moved to Illinois, Michigan, and then eventually found his way back east to Maine in the 1980s. 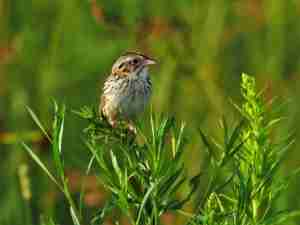 Gordon and his wife, both BTLT members, live about three miles from Crystal Spring Farm, and frequent the property for nature walks and bird watching. In early July, the Smiths were driving on Casco Road and stopped at the intersection at Pleasant Hill Road. With the windows down and the radio off, it was the perfect summer moment to hear the call of something truly magical. Gordon hadn’t heard this call in 55 years since he had lived in Michigan, when he was a teen and would go birding in grassland habitat. He rushed home, got his camera and audio equipment, and got back to Crystal Spring Farm as quickly as possible to try to find the Sparrow. He noted that “they can be cryptic. They’ll sing but you can’t find it. Their call is like a hiccup, not a song, and it carries quite a bit.”

What most people would dismiss as just another chirping bird in the July soundtrack, Gordon identified this particular species that are not usually found in Maine. They’re typically a Midwest grassland bird. “They’re not supposed to be here,” Gordon said, “and yet I saw two! Singing a lot, about 400-500 feet apart.” He returned day after day for almost two weeks, monitoring their behavior and looking for evidence of breeding, like collecting nesting materials. Check out Gordon’s eBird for his photos, audio recordings, and observations. Gordon observed them perching on goldenrod, singing day after day, but no breeding behavior was witnessed. Over the course of the next month, the New England birding community caught wind of this exciting, and peculiar, news and flocked (pun intended) to Crystal Spring Farm to see the Henslow’s Sparrow for themselves. The last recorded sighting of this particular bird in this area was in 1986 by Peter Vickery at the Brunswick Naval Air Station. 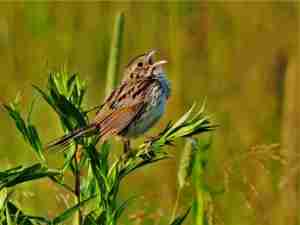 Both individual Henslow’s Sparrows were observed perching and singing from their respective territories for at least 24 days (since discovery on July 5). No breeding activity had been observed. Gordon shared that “Henslow’s sparrows are found only in old fields that have not been disturbed for several years (like the farmland along Pleasant Hill Road, east of the 4-way Stop intersection). Thus, because of its restrictive old field habitat, even where it breeds in the Midwest (Iowa, Missouri, Wisconsin, Michigan, Illinois, Indiana, Ohio), it is uncommon.”

Eager to chat with another phenomenal local birder, I hopped on the phone with an old friend Doug Hitchcox. He got the eBird alert of a bird he hadn’t yet seen in Maine on the way back from Monhegan Island in early July. He noted that with western Pennsylvania hosting the closest, largest population of Henslow’s sparrows, they’re rare in the northeast. With hundreds of folks coming to see them, some from as far as Rhode Island, it is “very cool for just a little brown sparrow.” They can be found in decent numbers, in the right places in the Midwest, but because a lot of the area is developed and threatened by row cropping agriculture, many grassland bird species populations are dwindling.

I asked Doug why or how they may have arrived here, and why two? Doug suspected that they’re potentially prospecting, that maybe there was too much competition where they were born last year and they’re trying to find new range to be in a new habitat to breed. He commented that it truly “says a lot about the habitat in that field – a lot of goldenrod, the right height of plant species, everything was perfect.”

Doug continued on, sharing that, “All grassland bird species are in trouble due to habitat loss – they’re one of the fastest declining bird groups in North America. This Henslow’s Sparrow could be a key species to help other birds like meadowlarks, bobolinks, and other grassland species – whatever helps nesting birds, is great for the general ecosystem!” 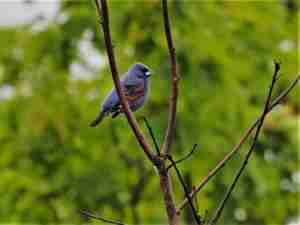 BTLT’s Director of Stewardship Margaret Gerber noted that, “It’s been an exciting season at Crystal Spring Farm for birds. A few other rare grassland birds were observed for the first time in the blueberry barrens this summer, which is encouraging to see following management efforts, including prescribed burns, to support and maintain habitat for endangered species that depend on this natural community.” In just a single month this summer, an eBird hotspot at Crystal Spring Farm had roughly 87 species reported! Gordon Smith and Doug Hitchcox, along with many other birders, have spotted grasshopper sparrows, savannah sparrows, swallowtail kites, eastern meadowlarks, whippoorwills, and blue grosbeaks at various locations on the property. There’s an estimated 170 bird species at Crystal Spring Farm, with a variety of different species spotted across the diverse landscape of forested trails, blueberry barrens, and farmland fields.

It’s an exciting and thrilling mystery to hear and see rare birds at this property, but it goes to show that management of mixed-use land can yield productive agriculture, public recreation space, and still support a thriving level of biodiversity.