I was first introduced to seaside mudflats through Sal’s clamming adventures in Robert McClosky’s “One Morning in Maine.” Growing up far from Maine, this children’s book gave me a glimpse into life in Maine and highlighted nature’s cultural importance in the state. McClowsky’s works invite readers to find joy in simplicity, and they inspired me to begin this column—to illuminate spaces right around the corner from Bowdoin that can evoke a similar elation.

This week, I discovered the long marshy grasses at Wharton Point, which is only a 15 minute bike ride or a 7 minute drive from Bowdoin’s campus. A simple route to the water, I followed Maine Street until it became Maquoit Road, leading me to a dock that eases to the bay.

Named after the seventeenth-century Brunswick settler Thomas Wharton, Wharton Point has a rich ecological history that dates back to before the ancestors of the native Wabanaki people used the area for cartage and clamming. The salt marshes generate a tidal mixing of nutrients with organic matter that provide an important habitat for shellfish and wildlife, hosting thousands of birds year-round as they seek refuge from 20,000 mile-long migration routes.

Numerous local organizations have collaborated to protect this land around the bay, including the Casco Bay Estuary Partnership, Maine Coast Heritage Trust and the Brunswick-Topsham Land Trust. Conservation work has allowed the area to remain a focus for environmental research by local students. Maine is one of the only states today that still has local shellfish management programs, and Maine’s Department of Marine Resources Public Health Division helps to monitor shellfish populations, assist in issuing fishing licenses and setting harvest limits, with access given sparingly to depuration diggers or local harvesters.

Such conservation efforts are needed amidst the various threats to the future of clams, including their economic value but also the beauty of their habitat. Wharton Point faces challenges associated with bacterial, natural and chemical pollutants, as well as the impacts of ocean acidification and coastal erosion.

Without a natural predator in Maine, green crabs also pose a threat to clams, shore crabs and oysters. Various conservation groups have considered solutions that benefit both the ecosystem and the economy, fostering initiatives to build fences to protect shellfish beds and set traps along the shore to decrease crab population. There is much more than meets the eye at Wharton Point, and a lot of hard work contributes to the preservation of its beauty.

Sitting out on the dock, among grasses dancing in the wind and water shimmering in the light, Wharton Point is the perfect spot for a breath of fresh air. With years of bountiful history beneath the surface, you’ll want to stay longer than a mere moment.

In the fall of 2007, the Trust for Public Land, Town of Brunswick, and Brunswick-Topsham Land Trust gathered with elected officials and residents to celebrate the conservation of 167 acres of waterfront property on Maquoit Bay now known as the Maquoit Bay Conservation Land. The Town owns the property while BTLT holds a conservation easement, and we work in partnership to manage the property. It has become a beloved community resource and a favorite place to enjoy a short walk to Maquoit Bay.

Recently, BTLT worked with the Town to add a new sign at the Maquoit Bay Conservation Land property acknowledging the Stoddard’s contribution. If you enjoy this property and see the Stoddards around town, make sure to share with them a big thank you! 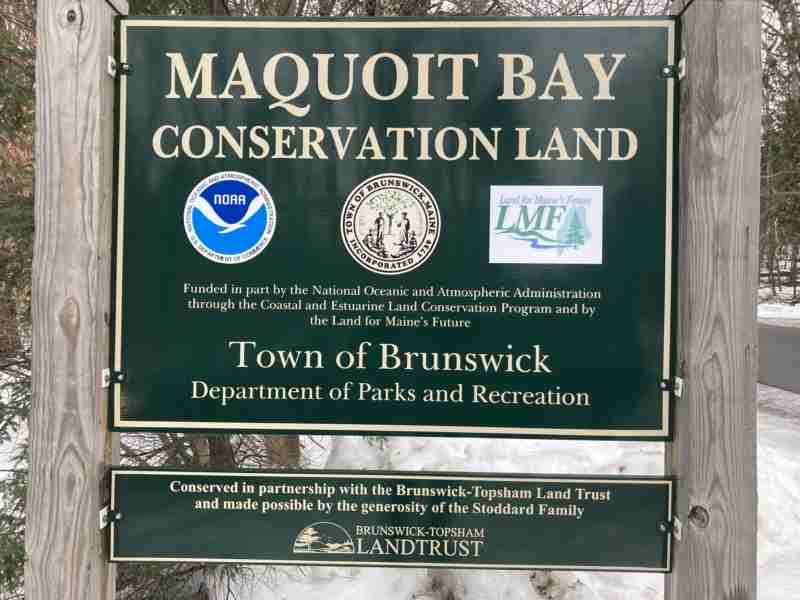