It’s once again blueberry season at Crystal Spring Farm. A portion of the farm on the south side of Pleasant Hill Road consists of a rare natural community of plants known as a sandplain grassland, which is ideal habitat for low-bush blueberries. It’s July, so the blueberries in the barren are ripening now!

Please note that the Land Trust only owns a small section of the barren. The much larger adjacent property is leased and managed by Seth Kroeck, Crystal Spring’s farm manager, for the commercial sale of organic blueberries. Please do not pick beyond the Land Trust’s clearly marked property boundary. See photo below. 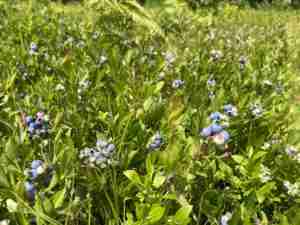 Kroeck described his growing process for us. “Growing blueberries is a two-year cycle. We prune the plants, either by mowing or burning, the spring after the harvest. The next year they regrow and it is on this new growth that they make flowers and then fruit. By dividing the field in two, each season we have one section of plants in regeneration and one ready to harvest.”

BTLT undertakes a similar management practice, and last spring half of the section open to the public was burned to promote healthy growth of this unique habitat. As a result, it’s looking like there will be a bumper crop of blueberries on the 14 acres that were burned last year!

As a result, this year you will also see that roughly 3.5 acres of the Crystal Spring Farm barrens south of the Blueberry Loop are roped off. Seth Kroeck and the Land Trust are working together to harvest, process, and donate blueberries from this area to folks in our community, so please observe the signs and do not pick in this area. Stay tuned for more information and updates about this later this summer!

The boundary line is marked with metal stakes and signs, and the lone trees in the middle of the field mark part of the boundary. 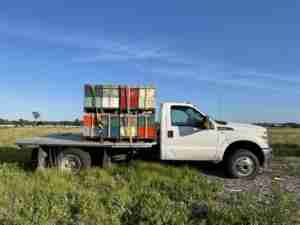 Kroeck also noted that “Bees for pollination are rented from Swan’s Honey in Albion. We truck them back and forth, loading in the evenings when the colonies are inside the hives. It takes 30 to 40 hives to pollinate this crop.” There are also a few ‘resident hives’ on the northside of Pleasant Hill Road that help to pollinate the blueberries when they are in flower.

Mowing, bringing in hives to pollinate, harvesting, and processing are all labor and capital intensive for Kroeck and Crystal Spring Community Farm. But, blueberries have become one of the farms’ most important crops, and can be found in natural food and grocery stores up and down the coast. This significant investment is also why we ask the community to be mindful of only picking in the areas BTLT has set aside for public gathering.

The massive “barren” at Crystal Spring doesn’t just produce blueberries, though. The area is a rare natural community home to sedges, birds, reptiles, and butterflies that depend on sandy soils and full sunlight to thrive. Once common along the northeastern coast, development and changing land uses have all but eliminated this unique biome, and the Maine Natural Areas Program lists it as “critically imperiled.” The unique habitat is a product of geologic history and human actions. The sand and gravel deposited by melting glaciers at the end of the last ice age provides a level, well-drained base that acidic plants love. Both Native Americans and European settlers used fire deliberately as a way to maintain the area as grassland and promote blueberry production.

In 2019, BTLT hosted a “bioblitz” at the property to help catalog the many species that call this place home. The recent prescribed burn of the blueberry barrens will help ensure this unique habitat is sustained, and BTLT will carefully monitor the recovery and the species that it has impacted. This year Grasshopper Sparrows and Eastern Meadowlark have been observed in the barren as well as rare sedge, all which are threatened or critically imperiled species that rely on this natural community.

Our blueberry barren is located south of Pleasant Hill Road. To access it, you can park at the Crystal Spring Farm trail parking area and take the East Trail.  Where the East Trail intersects the Blueberry Loop, take a right toward the field and you’ll find blueberries! 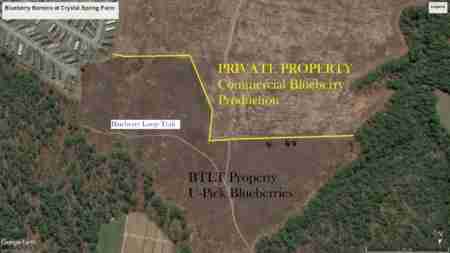 As you enjoy the blueberries and engage in this wonderful rite of summer, please respect a few important rules: 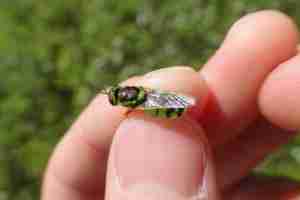 It must have looked odd. In one corner of the Blueberry Fields at Crystal Spring Farm, a group of people crept across the fields, every now and then one leaping or pirouetting with a long net on a pole. In the other, people knelt in a circle around a miniscule patch of grass, their eyes inches away from the stubby flowers. But what looked like modern dance or pagan ritual was actually naturalists at work!

On June 8th, BTLT hosted its first ever Bioblitz at Crystal Spring Farm. The goal of a bioblitz is to compile a list of all the known species in a given area over a defined period of time. Expert, amateur, and aspiring naturalists all get together and spend a morning, day, or week catching butterflies, following beetles, scoping out birds, and identifying wildflowers, recording their observations as they go. Bioblitzes can be useful for a variety of reasons—data collection, public engagement, or just a fun excuse to get outside. But why focus on these little fields? 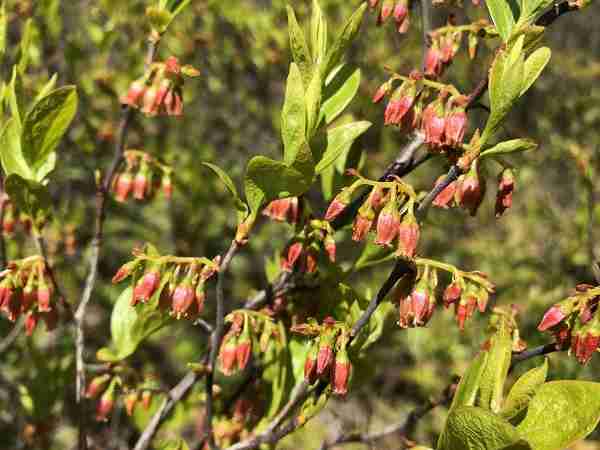 What many people know as the “blueberry fields” at Crystal Spring Farm is really a rare natural community type called a Sandplain Grassland. These prairie-like ecosystems appeared in Maine soon after the glaciers retreated, tracing the outline of the sandy glacial moraines and outwash deltas left behind. They were likely maintained in their open state through burning by the indigenous Abenaki people for blueberry farming and game hunting purposes, but after European settlement, many of these grasslands were developed, converted to agriculture, or invaded by trees as a result of fire suppression. The modern remnants of this natural community in the Northeast are ecologically enigmatic, and ranked as “extremely rare” by the state of Maine.

As stewards of the conserved land at Crystal Spring Farm, we consider it our responsibility to preserve these rare elements of Maine’s natural heritage. In the next several years, we hope to implement prescribed burns in the blueberry fields as a management tool to reduce tree and shrub cover and sustain the natural grasslands. But we won’t be able to tell how effective these treatments are unless we understand exactly how they change the landscape— so we put out a call for enthusiastic naturalists to help us! 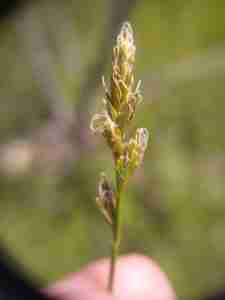 So on a warm Saturday morning in June, BTLT staff and volunteers met bright and early on the Blueberry Loop for an early morning birding hour. After hearing and witnessing uncommon grassland birds such as eastern meadowlarks and prairie warblers, we divided into two naturalist strike teams—one catching and studying insects, and the other identifying and recording plants. Pictures and identifications were uploaded to iNaturalist, an app designed to collect and share species observations from across the world. If you are an iNaturalist user, you can see our collected observations under the project “BTLT Blueberry Barren Bioblitz. Team Bug had a fruitful morning catching and observing an astounding number of native pollinators and insects such as ichneumon wasps, soldier flies, nomad bees, and pine elfins. Team Plant learned how to identify plants using botanical keys, and wielded their newfound knowledge to identify chokeberries, cinquefoils, and blue-eyed grasses, and discover endangered species under their own noses, including a vast population of the endangered velvet sedge (Carex vestita) and new populations of the rare dryland sedge (Carex siccata)!

We will be holding a second Bioblitz this summer on August 10th (check our Events page for more information closer to the event date!), to continue collecting pre-burn baseline data, and will continue to host bioblitzes in the summers following our burn management, to understand how biodiversity changed in response—like taking pictures both before and after a home renovation. 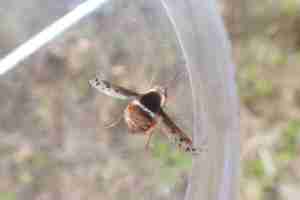 Apart from gaining valuable data on the biodiversity of an area, we came away with a greater and deeper appreciation of what our conservation efforts are protecting here at Crystal Spring Farm. By the end of the day, we found ourselves noticing little things we hadn’t before; a quick-fluttering day emerald moth, iridescent tiger beetles glinting in the sun, waves of velvet sedge rippling gently in the breeze, a sole pink ladyslipper standing erect above a low sea of blueberry bushes. We share our conserved places with these special species, and it’s the least we can do to get to know our neighbors.

Thanks to Richard Joyce for helping to organize this event, and to all the volunteers who showed up to help!