Sandy Stott, BTLT Board Member and local writer, recently began a regular series published in the Times Record all about the Mere Brook Watershed here in Brunswick.

It might, depending on your source, be called Mare Brook. And the word “creek” sometimes figures into its name. Then there are the named and nameless tributaries. If all these water courses were twine, Brunswick proper seen from above would look bundled by them. Though the nearby Androscoggin is much larger and more famous, Mere Brook is truly of Brunswick. It is our aquatic bloodstream; it is the brook that runs through us.

My acquaintance with Mere Brook is local. To get to our neighborhood, a cluster of houses ending in a cul-de-sac just south of the Bowdoin College playing fields, you drive or walk through a curved dip in the road. Beneath that dip, a culvert admits and then dismisses a stream that approaches through a sharp gully; this is the western branch of the Mere Brook. It begins a half-mile or so upstream, its headwaters rising from an aquifer that runs also beneath Crystal Spring Farm’s working and conserved lands. The farm’s name suggests the initial water’s purity. 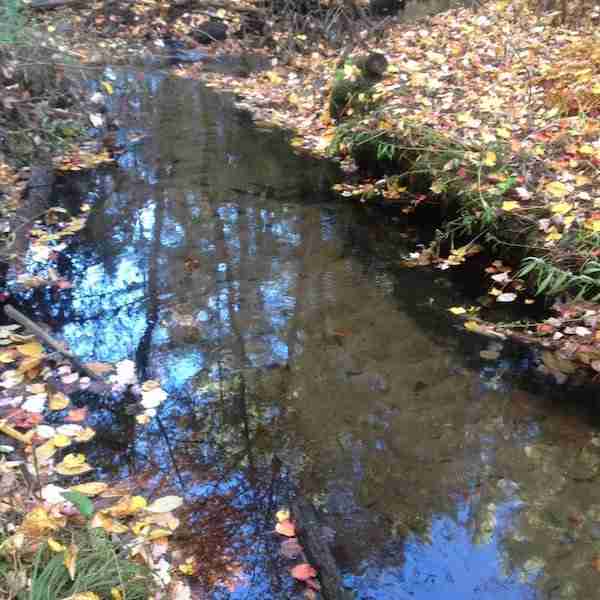 Beyond the culvert, the brook braids as it crosses marshy flat land, receives then a tribute stream from its right and empties itself into Coffin Pond. The pond, raised and held by a small, town-owned dam, once provided ice, summer’s coolant before the advent of electric refrigeration. Now it plays home to a summer heron, a kingfisher, and, for a while not long ago, the local eagle, who kept track of some hectoring crows and our tribe of ducks from a tall white pine. Along the earthen berm of the dam, one finds an occasional fisherman, chasing, perhaps, rumor of trout. In deep summer, algae grows in green streamers and lilies pad the pond.

In the semisecret approach-gully that I frequent above the dip, the brook runs clear over a bed of clean, manilla sand, and, if you watch patiently, fingerling trout may appear. But after a heavy rain, the water is less clear, turbid, really, and here we enter the saga of the stream’s load, what it must bear…and where.

That story is both sobering and hopeful. Even in this early western stage of its brookhood, Mere Brook carries a lot of sediment, and in their grant-funded 2016 study, FB Environmental Associates found also elevated bacteria levels and sign of other pollutants. Other monitoring along the densely developed eastern flank, which drains much of the old naval air base, records other pollutants, impoundments, and watershed troubles. All those elements add up to Mere Brook’s being classed as an “urban-impaired” stream in a mandated, biannual state report to the federal government, which suggests (mandates, actually) that we, as a town, go about addressing that impairment.

It seems then the best sort of news that Brunswick has begun just that work. The FB Environmental Study offered a baseline assessment and further questions to be addressed. Recently, the town received another grant to enable shaping an improvement plan for the brook’s 3,720-acre watershed. Town planner Jared Woolston will serve as the coordinator for the plan, and Woolston hopes to engage a variety of citizens and groups from various town locations to develop this plan and raise awareness about the brook and its challenges. 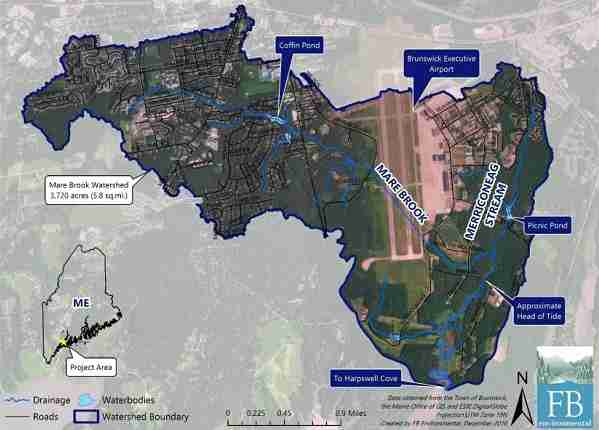 Learning what the brook carries brings us finally to where it’s going. Like all waters, Mere Brook aims for the sea, and, wherever you begin, Harpswell Cove isn’t far away. There, twice each day, the sea comes to the tidal meanders of the brook; there, at all hours, the brook comes to the sea. What it carries colors the cove, inflects it health. Here, the stakes are high. What our aquatic bloodstream delivers to our sea and its mudflats affects fishing — shelled and finny — and the waters on which we all depend.

All of this crosses, flows through, my mind as I wander often through this little, nearby gully and watch Mere Brook on its way to the sea. To my south, the bank rises to our neighborhood; to my north, it climbs to the flat woodlands that fringe the college’s playing fields. But in this semi-wild corridor for water, the pines round out to surprising girth. It would take two of me to join hands around them. In the mud, I find evidence of other passage — fox, deer, a cat print that makes me wonder about bob.

Water and life ease along this Mere gully all day, every day, all night, every night; it’s up to us to take the impairment out of the eternal.

Sandy Stott is a Brunswick resident, chair of the town’s Conservation Commission, and a member of Brunswick-Topsham Land Trust’s Board of Directors. He writes for a variety of publications. His recent book, Critical Hours — Search and Rescue in the White Mountains, was published by University Press of New England in April, 2018; Tantor Media released an audio version of the book in February, 2019. He may be reached at fsandystott@gmail.com.

BTLT in the News, “FOXCS advocates for local Nordic skiing”