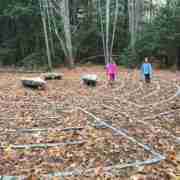 I loved the calm that followed the October wind storm – no sounds of machines or even music playing in our dark house, save for the whooshing of falling leaves – and only the flickers of candles to see by once the sun had set. I wanted more of the simplicity that being without electricity had provided. Our girls also felt a bit shortchanged when the power came back, bringing an end to unexpected family time spent playing board games by the fire and evenings carrying lanterns up to bed. It encouraged our family to focus on each other – my husband and I couldn’t work without the internet and many of our daily routines like bathing ourselves and washing clothes and dishes were suspended without hot water and the use of our electric machines. We were all truly present in the moment and it got me thinking of ways to replicate this in our daily lives.

Mindfulness is becoming a common term in more circles than just yoga studios. In school, even in first grade, our girls practice breathing techniques to calm down and focus their brains on the learning that they need to do. And, in a recent meeting of a nature playgroup that we are a part of, one of the mothers led a lesson on mindfulness in nature. Each child walked along a short stretch of trail by him or herself in silence. And us parents had a chance to stand quietly in the woods along the trail by ourselves as well. Rain dripped off of leaves, birds chirped, clouds moved – there was much to observe. Then we shared that one of the reasons we adults love to be outside is nature’s ability to settle our often-busy minds. In addition, the motion of walking keeps our bodies busy so that our minds can become calm. This is particularly true of children who can often focus better while in motion!

Lili and Phoebe in the Labyrinth

This led me back to the labyrinth. I had walked the labyrinth with my girls before – at events like its opening ceremony and the lantern-lit solstice walk, and several times in between. But, I wanted to do it again since they had been working on the practice of mindfulness. This time, as before, they silently walked back and forth. They looked carefully for the stones, many of which were covered in wet leaves. But, when they reached the center, they each picked a different bench and sat quietly. They continued to be silent even after I reached the center, not seeming overeager to see what might happen next and what I might have brought in my bag (which often contains goodies). After a few moments, I motioned them over to sit on either side of me and I was the first to break the silence – amazing! We shared some cider while we also shared the thoughts we had while walking. Lili daydreamed of tiny fairies that could bring back to life those we have lost in our lives; and Phoebe thought of how grateful she was to have food and a warm house to live in – serious stuff for six year olds! Phoebe reminded me that mindfulness included looking outward as well as inward, so we spent a few moments looking and listening. Lili noticed that the trees that had fallen made the woods look more interesting and Phoebe said the circle of trees around us reminded her of the circle of life (cue “The Lion King”).

A drawing of the Labyrinth and mindfulness in the woods.

On our way back out, I asked them to focus on what the labyrinth looks like – its shape and patterns, and told them that they would have to draw it when we got home. I told them they could draw what they thought of as the labyrinth but that it didn’t have to look like exactly like it. What they drew was full of whimsy and imagination both from their inside thoughts and from their natural observations.

This all took place in less than an hour but seemed to fuel us for the rest of the day as if we had smoothed out the squiggles in our brains by tracing them with our feet – well worth the time and I hope to do it again soon. And this year, more than ever, I look forward to the December solstice walk to trace the labyrinth’s patterns by the light of lanterns in celebration of the darkness.

Giving Tuesday – What the teachers have to say