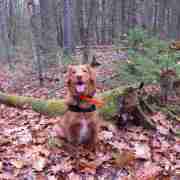 When I awoke last Sunday I looked out the window and thought “This is a perfect day to burrow under a bed of leaves in the woods at Crystal Spring Farm!”

Burrowing under leaves is not a normal activity for me. When I visit Crystal Spring Farm (CSF), it is usually to hike or ski the trails, shop at the Farmers’ Market, or tend my plot at the Community Garden. But today was special because I had volunteered to be a “hider” for a training session run by Maine Search and Rescue Dogs (MESARD), a group called in to find people who have gone missing in the Maine wilderness.

This was my first time as a MESARD hider, so dog-handler Sarah and flanker William brought me to the beehives at CSF and gave me a radio, a GPS, and a quick tutorial. As I listened, I peeked into Sarah’s car to get a glimpse of Sarah’s dog Zeke, the fluffy cappuccino-colored dog assigned to find me. For a moment I wondered if Zeke might be too adorable to be a serious search dog, but I didn’t have time to worry because soon I was scurrying after the long-limbed William into the 20-acre search area as he searched for a good hiding place for me.  He found one – a shallow gully under a fir tree – and then disappeared into the woods after telling me it would probably take Zeke 45 minutes to find me.  I settled in, covered myself with leaves, and waited while monitoring Zeke’s zig-zagging route on my GPS screen. 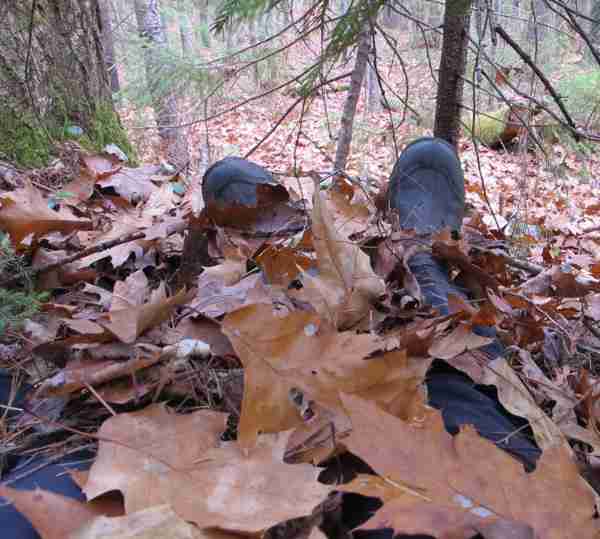 Can YOU see me?

Judging from my GPS, Zeke was still far away, but in the distance I heard the faint tinkling of a bell, a comforting sound that meant I would soon be found by the wearer of that bell. The ringing grew louder and louder until suddenly a giant black shepherd rushed excitedly at me, slicked my face as if saying “Tag! You’re IT!” and ran back to her handler to report her discovery. The shepherd’s handler approached me, realized that her dog (named Wren) had found someone, just not the intended someone, and praised Wren for her discovery before the two continued their search for the intended “victim”.

I realized I was viewing the world through dog-slobbered glasses, so I wiped Wren’s saliva off my lenses and nestled into my gully again.  I soon heard the familiar sounds of a ringing bell and the rustle of paw-steps in the leaves.  And then I was found again, this time by Zeke, who wanted to make it clear that he is not just an adorable dog but also a serious worker.  Zeke was rewarded for his successful search with heaps of praise, plenty of treats, and a few rounds of fetch with his favorite toy. 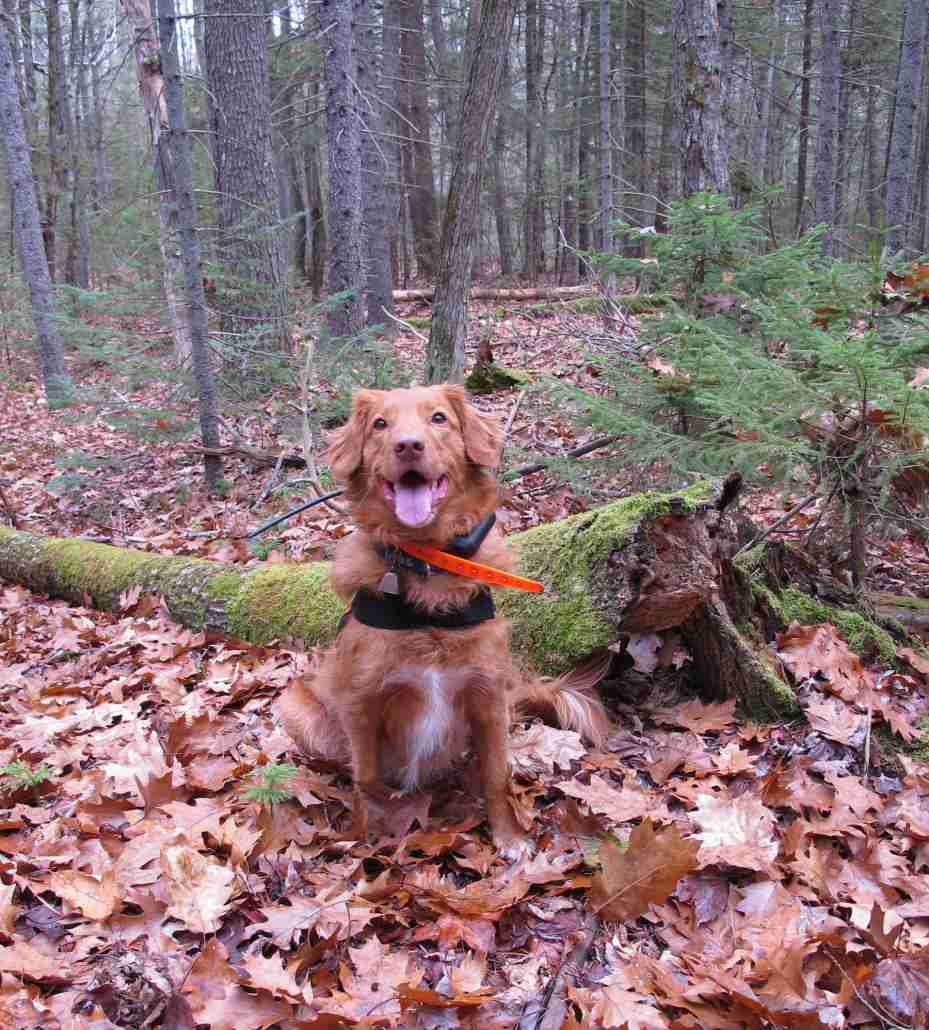 I hid two more times in different locations at CSF. I was discovered by Kobuk and Jenga, both shepherd breeds. Having been discovered by four dogs, I was fascinated by how different each of my finders was. Each dog was well-behaved and driven to carry out his or her search mission. But each dog had an undeniably unique personality behind that work demeanor. Some were playful, others calm.  Kobuk was mellow while playing with his beloved toy, while Jenga enjoyed a hardcore game of tug-of-war, especially if it resulted in her being swung around in circles while still gripping the toy in her teeth.  After finding me, Zeke excitedly ran back and forth between me and his handler, while Jenga – once she knew her handler could see us – stayed close as if to protect me. 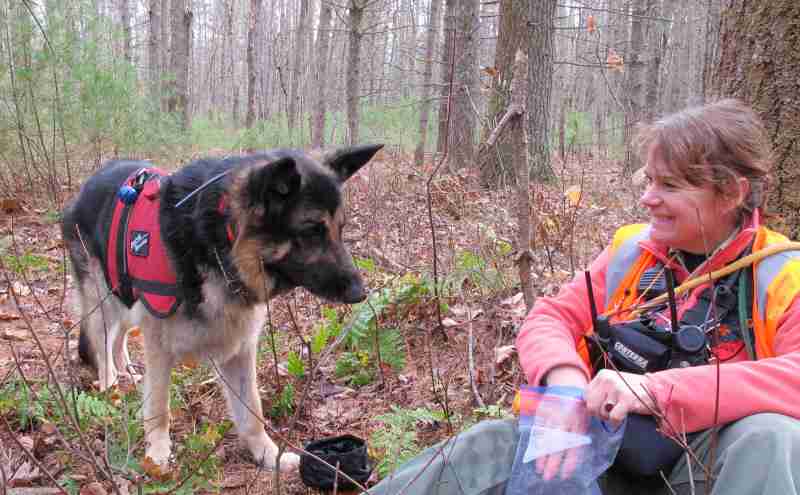 There are many ways to enjoy CSF (one of my favorite spots in Brunswick). Helping MESARD provided a new way to enjoy this special place while also giving me the opportunity to meet new individuals (two-footed and four-pawed). MESARD does important work and regularly assists the Warden Service during search and rescue operations. It makes me happy that the Land Trust can provide the venue for these training sessions. So if you see a vest-clad dog off-leash** in the woods at CSF, don’t distract them from their important work! 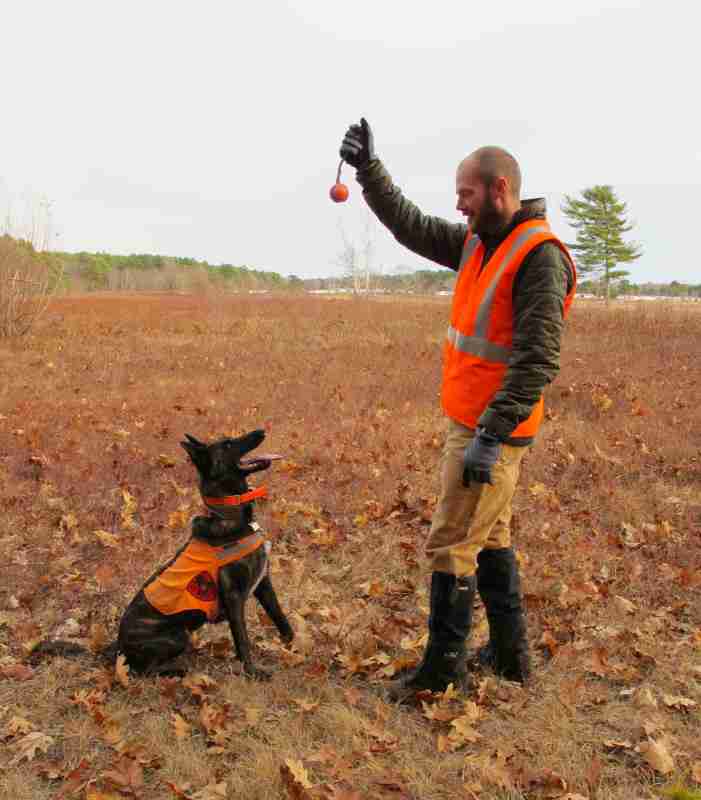 **Please note that these dogs have special permission to be off-leash at CSF for training purposes only.