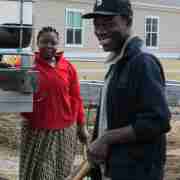 Recently in the Forecaster:

BRUNSWICK — Enock Mukadi spent the first 20 years of his life in a town called Mwene Ditu, in the Democratic Republic of Congo.

He spent the last year in Brunswick, where he has found a way to make sense of the change in the community garden at Crystal Spring Farm.As the sun beat down on Tuesday afternoon, Mukadi walked through his two plots at the garden, pointing out and identifying the vegetables he was growing.

“I have spinach, carrots, Chinese cabbage, potatoes, red onions,” he said. He used to grow collard greens, but they were eaten by beetles. He replaced them with kale, which seems to be faring better.

Mukadi gets his seeds from the Tom Settlemire Community Garden, which was set up four years ago by the Brunswick-Topsham Land Trust. He is one of 70 people who farm the garden’s 82 plots.

Under a row of tomatoes, Mukadi sifts through the leaves and stalks, removing little beetles by hand and crushing them. Community garden “master gardener” Prentiss Weiss has taught him how to identify Maine pests, as well as organic ways to repel them, like using a spray made of Neem oil, a natural repellent.

That system is not 100 percent effective, however, so sometimes the beetles must be taken on in hand-to-hand combat.

“Some of these tomato plants, my English teacher gave me,” Mukadi said. Mukadi is about to finish classes at Merrymeeting Adult Education, and then start summer courses at Southern Maine Community College.

English is just one of the five languages Mukadi speaks; French, Swahili, Tshiluba, and Lingala are the others. He also says he has learned some Spanish and Thai from friends at Merrymeeting.

“Every time I start to learn a new language I get excited,” he said. He practices Spanish using an application on his phone, and described each language as a “new world.”

In this new world of Maine, there are some practical things that affect his gardening.

Mukadi said Maine’s windy days and cold temperatures have been a challenge for his vegetable growing.

He has insulated his potato plants with straw to keep the soil warm warm, and so far, it seems to be working. The plants stand knee high, with green leaves pushing up through their straw protection.

Even though the weather and pests are new, some of the vegetables he grows are not.

In another part of the garden, garden coordinator Corie Washow has set aside a plot for Mukadi to plant and experiment with African seedlings.

“We knew that Enock had brought some seeds from Africa and we had some open space,” she said.

Mukadi has started to grow winter squash, sorrel, amaranth, and African eggplant. “(The eggplant) is very bitter,” he said. “You need to cook it. You couldn’t eat it in a salad.”

Although Mukadi is the main caretaker of his plots, he said on Saturdays some of his brothers and sisters, as well as his mother, come out to help tend the plants. His sisters are making some signs about the vegetables so they can be “a kind education piece for the community,” Washow said.

Washow also said if the vegetables “take off,” the garden will save the seeds to grow again.

Mukadi said everything he grows will be quickly eaten by the 11 people in his family.

Mukadi has three brothers, and six sisters. They all moved to Brunswick last year after his father, who had been living in Portland for the past five years, found a house here.

“He tried to find a big house for a big family,” in Portland, Mukadi said. But he ended up finding one in Brunswick, near Cook’s Corner.

In the beginning Mukadi worried that wasn’t a good thing.

“At first we were all alone in that house,” he said. “We could see cars moving all around us, but no people.”

But now, Brunswick is a “community,” he said.

His siblings go to the local schools, and are always out in the neighborhood with friends, he said.

“Sometimes you have to leave things behind to go forward in life,” he said. “If you have ambitions, you need to sacrifice.”

Mukadi said he wants to get his bachelor’s degree, and then work for the United Nations, travelling and doing development work in countries like Congo.

“In Congo, things always change,” he said. “When presidents change, all things, like the military, change too.”

He said he has found peace in Maine, where the economy is “stable.” “Maine is good for me, I like a quiet place,” he said.

Looking down at this African eggplant sprouting from the soil, Mukadi said he didn’t initially think that his African seedlings would grow at all.

“Coming from this very hot place to this world that’s not very hot, a place that’s very strange, cold, and windy … I thought they would not come out,” he said.

But they have, “and they don’t complain about the weather,” he added.

It Takes A Village
Scroll to top
Translate »