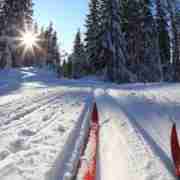 We appreciate being featured as the Land Trust farm in this great article in Portland Press Herald’s Source Section:

This has not exactly been a white winter, but Jenny Johnson’s 700-acre farm in Newburgh is full of woods laced with riding trails, and when she looks out on that scenery she imagines it being used for the kind of Nordic skiing adventures she always wanted to experience.

“Once I start skiing, I never want to stop,” she said. Realistically, she’d have to sleep at some point. “My dream was always to take a tent off my back and set it up.”

She’s working on a three-year plan to build cabins in the woods of her Pebblestone Farm – cabins being infinitely preferable to tents – and then groom cross-country skiing trails to them for her overnight guests. Maybe they’d offer day rates to skiers as well, embracing agritourism in the winter.

“I’ve read about it in a lot of different magazines about farming,” Johnson said. “They are really promoting it as a way to expand your financial base.”

Snow-contingent, of course. You never know when there might be a snow drought, or in the case of last winter, so much snow that less experienced skiers found it too daunting to venture out. For winter agritourism in Maine, the likes of farm stays and weaving classes take a back seat to cross-country skiing and snowshoeing. It’s not all about ski pass sales, either. Some farms offer groomed trails open to the public for free – a sort of goodwill policy that might pay off in visibility when it comes time to pay for a CSA or in visits to the farm store. Jane and Rich Lisauskas of Kennebunk cross-country ski along the Buzzell Trail at Harris Farm in Dayton on Jan. 26.

For commercial ski operations in the more developed areas of the state, like Cumberland County’s Pineland, and Smiling Hill, and Harris Dairy in York County, the trails and ski or snowshoe rentals themselves are a way to supplement farm income between growing seasons. Matt Sebasteanski, outdoor recreation director at Pineland Farms, which began offering cross-country skiing 14 years ago, said the income from the extensive skiing operation (30 kilometers of groomed trails) is important to keep the nonprofit farming operation running.

One of the enticements of cross-country skiing, at least for the thrifty, is that it is such an easy winter sport to do for free. But when you’re speeding along groomed trails at a spectacular place like Pineland, that $13 adult day pass doesn’t seem so indulgent.

For Pineland, the cost of maintaining the trails is “astronomical” Sebasteanski said.

The grooming team is six-deep and the biggest machine they have, the one that comes out once they have a solid base of snow, costs $190,000 new. Throw in the fuel involved and the inevitable repairs and “That’s a lot of ski passes,” Sebasteanski said.

“We’re not breaking the bank monetarily,” he said.

Where to ski: Maine farms that offer winter recreation

With 28 years in the business and 40 kilometers of groomed trails, Harris Dairy in Dayton is one of best-known farm skiing operations in the state. The family got into the business back then because there were about a half-dozen kids in the upcoming generation of Harrises who wanted to stay on the land and not enough of it to go around. Skiing was a natural fit, and family members work the rental area and give skiing lessons.

Among the lessons the Harrises have learned in over those three decades is pacing themselves when making big purchases. Bad years are unpredictable. Like last year, when farmer Dixie Harris said it was so cold that only the most “serious” skiers came out. Pauline Morin of Dayton picks her flavor of milk in the cooler at Harris Farm in Dayton.

“We try to have a good year, and then buy equipment,” Harris said. “We don’t buy upfront and think we’re going to have a good winter. That’s how people go out of business.”

Tom Greiger of Five Fields Farm in Bridgton, which has run a commercial ski business on agricultural land – it’s an orchard – since 1998, agreed. “You can’t make an investment that you can’t pay for.”

Greiger scoured eBay for a used Viking snowcat he got for $9,500. Only catch? It was in Minnesota. “I’m a bottom feeder,” he said cheerfully. “I am the one always looking out behind the barn for the discarded equipment.”

IF YOU GROOM IT, WILL THEY COME?

He is “almost the lone employee” at Five Fields Farm, which opened up its ski trails at the urging of an uncle with a ski operation in Vermont, who proposed the family make use of the orchard’s higher elevation and typically reliable snow coverage, “‘especially if the apple industry is not as healthy.’”

That turned out to be true when it became a losing proposition for Greiger to pack commercially. He began a you-pick operation instead and relied on the Nordic operation for both supplementary income and a means to keep the farm in the public eye, so that when the next fall rolled around, skiers with a yearning to pick apples would remember the name Five Fields.

All these practitioners of winter agritourism have seen other operations come and go, which begs the question, is there more room in the marketplace for more ski operations? When Pineland entered the cross-country ski business, Greiger said he immediately lost some regular customers, including five annual ski races he’d regularly hosted. But he still draws enough business to stay open.

“I would not try to dissuade anyone,” Greiger said. “I would just say, enter it knowing what you’re getting into. And I hope you aren’t doing this for money because you aren’t going to make a lot.”

There are also costs, such as liability insurance, that some farmers may not consider when they decide to open up their property to skiing. If a farm is just being “a good neighbor” and allows the public to ski across its fields for free, the owners are probably covered by their standard homeowners insurance, says Jim Chalmers of the Chalmers Insurance Group in Maine, which provides policies for many of the state’s alpine skiing areas. But standard home and farm policies usually won’t cover “business pursuits” like Nordic skiing if the farmer is charging the public, so a special policy may be needed, Chalmers said. The cost of these policies can range from a couple hundred dollars into the thousands.

Pineland, for instance, pays $10,000 a year to cover its Nordic skiing and snowshoeing operation as well as other general outdoor activities, according to Erik Hayward, vice president of the Libra Foundation, who manages Pineland’s finances. An underwriter occasionally reviews the property for safety concerns, he added. Promoting agritourism is a big priority for the Maine Department of Agriculture, Conservation and Forestry according to Jessica Nixon, the director of marketing development department. “We just had a presentation on this at the Agricultural Trade Show,” she said.

But the department does not keep tabs, at least not accurate ones, on how many farms use cross-country skiing as a form of winter agritourism. Nixon referred a reporter to a Get Real Get Maine list of 32 farms for cross-country skiing, few of which actually offer any formal skiing opportunities, although some do groom trails on an occasional basis. Aldemere Farm in Rockport is a nonprofit working farm, owned and managed by Maine Coast Heritage Trust. If the weather cooperates, it hosts ski outings under the full moon. It’s all free and part of Aldemere’s educational and community mission.

“We really encourage the public to use it (the land),” said program assistant Jeremy Lucas, who puts in trails with a snowmobile – the cheapest way to groom. “But not everybody is into the agricultural side of things.” But they might appreciate gliding along on land that would look very different if it hadn’t been preserved. As Lucas puts it, “It would all be mansions.”

The Brunswick-Topsham Land Trust, which owns Crystal Spring Farm in Brunswick, gets help from the town of Brunswick to groom its fields and woods. No money changes hands, but it’s a win-win for everyone, even the family who manages the farm. Seth Kroeck and his wife, Maura, use the trails themselves, and enjoy the interaction with the public. Maybe the skiers will be back for the Kroeck’s CSA in the spring or put an order in for a fall pig. “We look at it as nothing but a benefit to have people on the farmland,” Kroeck said. “We like to think of it as a more European way of looking at the farmland, where it is within the public wealth.” Rich and Jane Lisauskas of Kennebunk cross-country ski along the Buzzell Trail at Harris Farm in Dayton on Jan. 26.

In between the vast Pineland models and the pure nonprofits are smaller commercial farms that offer free skiing opportunities from a similar, community-oriented mindset.

“I welcome anyone,” said Marie Kirven of Sweet Dreams Food and Farm in St. Albans, a lavender and herb farm that has, snow permitting, about 1,200 feet of trails going down to Indian Pond. She said the farm started offering skiing a few years ago because there weren’t other area farms doing so. “I call it I-95 when it is cleaned and groomed and well kept.”

“We want people to get out to nature and see what is going on,” Kirven said. Like the two pairs of bald eagles that live nearby. Skiers park in the farm store lot and if they stop off for some hot chocolate at the farm store afterward, or a bar of handmade soap, even better.

SOUP WITH YOUR SKI

None of these places are running skiing operations as standalone businesses. Nor would they want to. “It’s a great substitution or addition to what we already do,” Pineland’s Sebasteanski said. And great advertising. Even if Pineland skiers don’t avail themselves of the farm market for lunch, they might get a hankering to come back for disc golf in the spring, or the next time they’re in the grocery store, feel more of an urge to toss those Pineland meatballs in their cart.

Or as they do at Smiling Hill in Westbrook, step into the cafe and farm store for a hot lunch or something more rewarding.

“We have a lot of people who get ice cream after,” said Hillary Knight, the family member who manages the ski operation. “They feel like they deserve it after having that much of a workout.”

CORRECTION: This story was updated at 9:10 a.m., Feb. 7, to correct the location of Harris Dairy in York County.