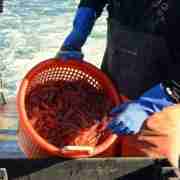 A great article describing the work that BTLT – through the Merrymeeting Food Council – has been working closely on with Maine Coast Fisherman’s Association.

HARPSWELL — Call it a tale of two cities, except they’re both towns on the coast of Maine.

“Many people in Brunswick don’t realize that there’s this gorgeous fishing community 10-15 miles away,” Monique Coombs, seafood program director for the Maine Coast Fishermen’s Association, said about Harpswell in an interview Tuesday. “There’s just sort of this space there.”

Coombs, a Harpswell resident, believes that a more tangible example of this cultural distance can be measured in seafood and money.

Times are tough, in multiple ways, Coombs said. Statewide, the number of boats that fished for groundfish off the coast dropped from 188 to 52 from 1996 to 2010, according to MCFA. In Harpswell, only a “handful” of groundfish fishermen remain, and they supplement with other catch, she said.

And in many fishing communities like Harpswell, fishermen are being squeezed out of their homes by rising property values. Coombs said someone who lobsters off a wharf in Harpswell could now have to live as far away as Phippsburg.

She believes that Brunswick, with a population of more than 20,000, and a strong local food movement fostered by the Brunswick-Topsham Land Trust, is a more direct market for seafood that’s not being tapped.

The question is, “how can Harpswell start to seize this opportunity and make money,” Coombs said.

To try to bridge this gap, the fishermen’s association, along with the Merrymeeting Food Council, are applying for funds from the Maine Community Foundation’s Community Building Grant Program.

Coombs hopes that a grant from MCF, which could amount to up to $10,000, could seed a more long-lasting economic vision.

The initial money would be used to hire Planning Decisions, a Portland-based firm with offices in Brunswick, to conduct a “needs assessment.”

This assessment, according to MCFA’s grant application, “would examine recent trends, opportunities, and challenges in seafood harvesting and production.”

Coombs specified that more analysis needs to be done to understand the regional implications of the dwindling groundfish industry, the impacts of imported seafood on the local market, and the gaps in distribution pathways on the coast of Maine.

Then, the fishermen’s association would organize meetings in Harpswell to discuss solutions for strengthening the town’s seafood sales.

“These meetings don’t have to be at Town Hall,” she said. One option for a meeting place could be at Cook’s Lobster House. “A conversation over a beer can be more useful,” she said.

Often, “fishermen are told (by nonprofits) what they need, as opposed to being asked,” Coombs said. What she wants to know, she said, is “what do you think the gaps are?”

To that end, Coombs has not laid out a final vision for the project. She said solutions could take many forms: a Harpswell-specific label on seafood sold to retailers, a plan for development at the town’s Mitchell Field property, or a new lobster store, for instance.

“Maybe there’s someone out there who already has a great idea, and needs angel investors … we could be that,” she said.

If the project works out, Coombs hopes the Harpswell model could become a template for other food councils around the state looking to boost local seafood markets.

She encouraged anyone with any idea on how to move forward to contact her atmonique@mainecoastfishermen.org.

“We’re going into this very open-minded,” she said.

In PPH Source: When winter arrives, some Maine farms turn into cross-country...