There are a couple of new farms represented at the market this year. You’re probably thinking of produce or maybe meats or cheeses. But, one of these farms is actually located in the water – the waters of Maquoit and Mere Point Bays. The seeds that they put out don’t exactly sprout, but instead turn into delicious, juicy oysters. Mere Point Oyster Company (MPOC) is a couple of years old, but is just getting big enough to be able to produce enough product to bring to places like the Brunswick Farmer’s Market. MPOC is two guys and their two sons working together to create a sustainable product from our local waters. And, their oysters are super tasty, too. 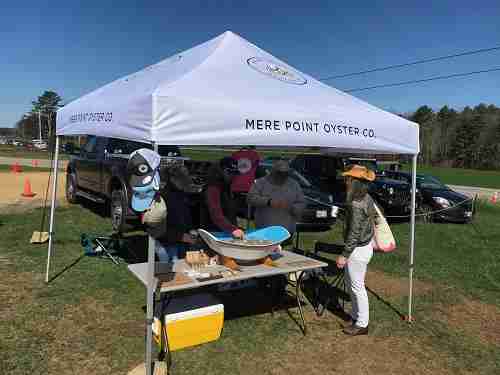 Oysters are truly amazing. For the lumpy, slimy ocean creatures that they are, they are also true ecosystem workhorses. Oysters are better filters than any that humans could invent. They clean our sea-water, filtering up to 50 gallons of water each day, turning excess nutrients into nutritious protein. That leaves the water cleaner and clearer for more plants and animals to thrive. They’ve been a part of Maine coastal culture and cuisine for hundreds of years. Oysters were eaten in massive quantities by the Wabanaki Indians, as evidenced the shell middens you can find along the coast. But, in the 1970s, their populations plummeted as a result of poor water quality and pollution. Now, the wild populations of our native oyster, Crassostrea virginica, are at very low levels. One of the reasons for the advent of oyster aquaculture has been to help restore these populations both for the health of coastal economies and for coastal ecosystems. 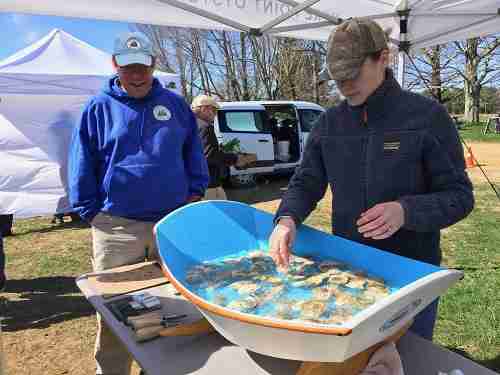 I am a Midwesterner by birth and I still remember eating my first oyster on a trip to California to visit my cousins. “Mmmm. It’s good,” I said, before feeling it going down my throat and reconsidering. I was only seven at the time. Now, I could down a dozen of them with great delight. But, I understand some of the hesitations people feel. They are also not the easiest to shuck, as I discovered once when I could find my shucking knife and tried using a combination of a screwdriver and a butter knife, managing to pry open my fingernail and slice into my hand more often than actually getting an oyster open.

So, let me offer a couple of simple ways to eat them that may allay your fears.

3 c half and half or milk

Parsley and oyster crackers for serving

BTLT in the News, “Topsham to celebrate opening of Head of Tide Park&...