Reflections on Earth Day at 50 from BTLT

“The ultimate test of man’s conscience may be his willingness to sacrifice something today for future generations whose words of thanks will not be heard.” – Gaylord Nelson, Founder of Earth Day

As is true for all of the celebrations and observances that are occurring during these extraordinary times brought about by Covid-19, it feels odd to be celebrating the 50th Anniversary of Earth Day amidst so much anxiety, fear and suffering. But there is something comforting, too, about maintaining bits of normalcy when possible and celebrating the things that bring us joy when we can. Nature’s abundance and the gifts we all receive from the earth are worth celebrating now more than ever.

As a way to mark the 50th Anniversary of Earth Day, I asked some BTLT leaders and supporters to share their personal memories of Earth Day. I have compiled these below. My hope is that these stories may inspire those of you who read them to reflect on your own, personal experiences with Earth Day and that you will be willing to share your stories as well. If you would like to share a story or picture (or both), please email them to kate@btlt.org and we will add them to this blog post as we receive them.

Thank you and may your Earth Day celebration include getting outside and finding comfort in nature.

“I was in New York City marching on the first Earth Day in 1970 with children from the classroom where I was student teaching!” Jaki Ellis, BTLT Advisory Council

“That was a great day!  I skipped school and took the train to Boston to be there on the Commons for the event. I was there with a photographer friend who took some great photos” Jane Arbuckle, BTLT member

Earth Day 1970 from afar: “The first Earth Day celebration was more a rumor than a reality for June and me. We were living in Kampala, Uganda where June was teaching French at Makerere University.  I was a Rockefeller Foundation research fellow, teaching a graduate economics course and investigating innovation opportunities in smallholder agriculture. News of a great celebration of the Earth’s natural wonders and environmental challenges came to us via an iffy BBC World Service connection.

On that first Earth Day, April 22, 1970, we were in Teso District, near the Kenya border, meeting with my field research assistants and local Iteso millet and cotton farmers. The topic of the day was how expanded use of ox-drawn cultivation implements might help Iteso farmers respond in a more timely way to the onset of the “long rains,” enabling them to improve yields of both their staple food crops and the cotton cash crop. It was all about harmonizing human effort and ingenuity with the Earth’s natural cycles. In keeping with local tradition, we concluded the meeting by sharing a big pot of home brewed millet beer in the shade of an enormous mango tree.” David Vail, BTLT Advisory Council

“April 22, 1970 I was a second year graduate student at Yale.  I was aware of Earth Day and knew there was some observance of it on campus, but I paid little attention.  New Haven and Yale were caught up in a dramatic series of events that culminated in  strike/rally May 1-3. 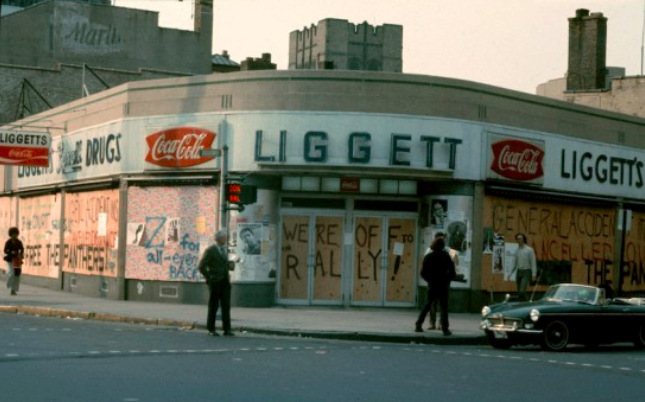 New Haven, on earth Day 1970. you can see “Free the Panthers” on the boarded up windows of the drugstore and “We’re Off – Rally”

That first Earth Day took place during the height of the War on Vietnam.  Tensions about the war ran high on many college campuses, including Yale.  And there were civil rights Black/White tensions as well. In 1969, member of the New Haven chapter of the Black Panther Party named Alex Rackley had been murdered.  Nine other members of the Black Panther Party, including Bobby Seale, were to be tried for his murder, the allegations being that Rackley had been killed because he was suspected of being an FBI informant.  The trial was to take place in New Haven, so a giant demonstration was called, one that would shut down the university for several days in early May.  On April 22, preparations for that rally/strike were the order of the day.  Stores were being boarded up, students were arranging for sleeping quarters for people coming to New Haven.  I was involved in those activities, pressing the Dean of the Graduate School to allow people to sleep in the Hall of Graduate Studies.

If memory serves, the Yale Political Union (an undergraduate organization) hosted a speech that day by Sen. Ted Kennedy, and that speech was disrupted a bit by students urging support for the “New Haven Nine.” Planet Earth was lost in the shuffle.

Postscript:  About 15 years ago, Michael Shellenberger (Earlham, ’93) co-authored an essay called The Death of Environmentalism, which argued that the environmental movement was a failure because it was not up to dealing with climate change and because it steadily lost its battles, being unable to make common cause with other matters — war, labor rights, civil rights, etc.  When I think about that first Earth Day, I’m reminded of how much the Vietnam War and race tensions shouldered aside Earth Day for me and many others.”  Doug Bennett, BTLT Board

“Having grown up in Brunswick (since 1958), I remember that on certain days, the wind would blow and he odor of the Androscoggin would waft south from the river to Meadowbrook and oh how it reeked.

One day, when I was in Junior High– around Earth Day–, I was in the car with my father driving across the Frank Wood Bridge. My father had an inventor’s mind and had sought patents on some of his ideas. The Androscoggin was covered with a thick layer of foam and I asked if he could invent something to clean it up.  He said he was working on a man with a big sponge! I laughed and he proceeded to tell  me all about the effort that Sen. Muskie was putting forth on cleaning up the rivers.

In 1972, we went to Washington DC for a rare family sight-seeing trip. Sen. Muskie’s personal secretary, Gail Corey, grew up in Bath and had worked for my father as a girl. She arranged special access for us and, among other things, we had a chance to meet the Senator. I was so proud of his work on  the Clean Water Act.

As a side note, because my father was in the hospitality business, we went to see the Watergate Hotel — which was brand new. Later, we were riveted with the Watergate break-in and subsequent senate impeachment hearings.” Liz Armstrong, BTLT Board

“In April of 1970, I was in the final weeks of high school in Auburn. I was aware of buzz about Earth Day teach-ins, but was more focused on spring prom, graduation, and the anticipation of starting college in the fall. Still, that first Earth Day, and the sustaining movement it helped propel, must have had a subconscious impact on me because I made conservation my profession as well as my avocation.

My most vibrant Earth Day memories occurred later. In 1990, for instance, I coordinated celebrations for the 20th anniversary of Earth Day in Maine. A key event was held in the Maine State House. We created and hung a giant Earth Day-Every Day sign in the middle of the rotunda. The governor and legislative leaders each gave a rousing environmental speech. Charles Pray was Senate President then and was running for reelection. His bumper stickers said “Pray for the Maine Senate.” He was not known as a strong conservationist. On my own time, I was also coordinating the Maine League of Conservation Voters. Charlie Pray had earned a so-so pro-environment score from our group based on his voting record. So at the 1990 Earth Day celebration, I joked that he might have to change his campaign slogan to “Pray for the Earth.” That got some play in the newspapers, but did not endear me to Sen. Pray.

At that time, I was also working for The Wilderness Society. Former Wisconsin Gov. Gaylord Nelson, the “Father of Earth Day,” was serving as Counselor to the organization. I got to meet him in Washington, D.C. During his four years as governor, 10 years in the Wisconsin Senate, and 18 years in the U.S. Senate, Nelson earned a reputation as an international leader for his visionary work on a long list of environmental initiatives. He received the Presidential Medal of Freedom in 1995.

“I was in the seventh grade and so perceived it as another hippy thing; actually I was disappointed at first that it wasn’t about sex, drugs, and rock and roll. But when one of the older students put up a wire fence enclosure in front of our school, filled it with trash, and put up a sign that said “Dallas, this is your trash” I began to think.

Soon after, my beloved math teacher Jack Hollon started the Environmental council and we collected and recycled paper. We also analyzed the lighting at our school and found that we could remove half of the bulbs and still have more than enough light. We saved the school thousands per year. I never turned back.” Nick Whatley, BTLT Board

“I remember April 22, 1970 well. I was a scruffy sophomore at Rumford High School, absolutely delighted to get out of school for a full day to help clean up local roadsides and the banks and floodplains of the Swift River. Senator Ed Muskie, Father of the 1970 Clean Air Act and and 1972 Clean Water Act grew up in the Rumford community, saw first hand the influences of the Oxford Paper mill on local air quality as well as the waters of the Androscoggin River, and became a key inspiration to many fighting the same fight across the nation. We all worked hard that day, removing several dump truck loads of old metal, tires, and trash, but probably more importantly, helped spawn extra a little extra community pride that carried well beyond that single day.” Steve Pelletier, BTLT Advisory Council

“As I was completing Basic Training in the US Army at Ft. Jackson in South Carolina in the spring of 1970, my recollection of hearing Senator Ed Muskie speak at a well-attended Earth Day celebration at Bates College must have been during year two or even three of the movement. At any rate, it was my first engagement with the environmental agenda and Senator Muskie was an important leader and true champion.” Richard Mersereau, BTLT Board

“This year I turn 50; so does Earth Day, which makes me feel even more connected to the planet I love so much.

Perhaps one reason that I am a nature nut is because I have grown up in an era of increased awareness of biological systems, the need for ecological integrity, valuing natural assets and the shiftiness of baselines.

I was not part of the generation that felt entitled to hold dominion over other living things. I WAS ONE of those living things; appreciating the manufacturing and productivity advances of the industrial era, while using technology and ecological design to undo the damage that came with it.

I give tours of Merrymeeting Bay, and as we count bald eagles I talk about the dioxin and lead pollution encapsulated in the sediments under the water. We see recovery year to year on the bay. More alewives, salmon and eagles. Yippee! I was two when the Clean Water Act was signed into law. It’s hard to imagine those safeguards not in place. Scary, in fact. Yet hard earned 70s era safeguards are not safe themselves right now.

The children recognizing the 50th anniversary of Earth Day can witness soaring eagles and abundant alewives, and I hope their lives unfurl during an era of radiant awareness that we are all part of nature and our health is inextricably entwined.” Alicia Heyburn, BTLT Advisory Council