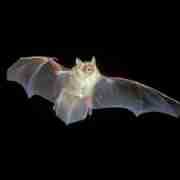 It’s the last day of Bat Week! Check out how you can take action, have some fun with the kiddos, and read below to learn more about bats in Maine. Scroll to the bottom to check out a video from Maine Fish & Wildlife too!

Bats – the flitting, shadowy creatures of night skies around the world – have long been associated with nocturnal, unworldly beings and agents of disease, with a sole intent to create terror, tangle hair, and suck blood. Yet when simply left alone, bats are fascinating creatures, harmless and highly beneficial, essential to the health of global ecosystems and the balance of nature by providing vital ecological services in the forms of insect pest consumption, plant pollination, and seed dispersal.

Bats are the only mammal capable of true flight, representing the second largest order of mammal – after rodents – with more than 1,400 species dispersed across tropical and temperate habitats and six continents, absent only from the polar regions and a few isolated islands. Present-day bats have evolved over more than 50 million years and listed in the Order Chiroptera – a Greek name inferring “hand wing” due to the evolutionary modifications of their elongated digits, or fingers. Like our own hand, a bat’s wing is highly manipulative and versatile, allowing it to capture small, flying prey on the wing. Another particularly unique attribute of bats is their use of echolocation to navigate and to locate food and water. Their calls vary by species in duration and structure and reveal much about the ecology and foraging strategy of each species.

Bats are divided into two major groups, with one group, Megachiroptera, primarily feeding on fruit, nectar or pollen. The second group, Microchiroptera, are more familiar to us here in Maine and insectivorous, with some specialized to eat more carnivorous diets, feeding on rodents, other bats, reptiles, birds, amphibians, and even fish… truth be told, only three of the 1,400+ worldwide species are vampire bats that drink blood.

Bats are also recognized for having one of the slowest reproductive rates for animals their size. Most bats in northeastern North America have only one pup a year, and many females do not breed until their second year. While this low reproductive rate is somewhat offset by a long life-span, often over 20 years, bats populations currently face a serious worldwide decline. Some challenges they face are endemic to their order, such as a slow gestation period and diseases like White-nose Syndrome. The primary cause of their decline however, remains directly tied to human activity and involves the ongoing destruction of natural habitats, accelerated climate change, invasive species, and in many regions, stresses such as hunting and persecution for sport and meat. They also suffer from a long-standing proliferation of harmful myths. Without concerted international action, their populations will continue to fall, driving many species to extinction.

White-nose Syndrome (WNS) is a devastating fungal disease, responsible for the death of millions of bats in North America since first discovered in a single cave in New York in 2006.  It has since spread across the continent, having been confirmed in 38 states and eight Canadian provinces, with evidence the fungus that causes white-nose syndrome, Pseudogymnoascus destructans, present in five additional states. Named for the telltale white fuzzy growth on the nose, ears, and wings of infected bats, WNS repeatedly rouses bats from hibernation, causing them to consume their winter fat stores — which often results in starvation before spring. Numerous hibernacula have been devastated with 90 to 100 percent mortality rates. To date, 12 North American bat species have been confirmed with WNS, including two federally endangered species, the Gray bat and Indiana bat. Three species in particular – Northern long-eared, Little brown, and Tri-colored bats – have been most profoundly affected. The Northern long-eared bat was listed as federally threatened due to the rapid decline of this species from WNS. It continues to cause massive population declines for multiple hibernating bat species – resulting in one of the most significant losses to wildlife in the past century.

Maine has eight species of bats. Five of those – Big brown bat, Little brown bat, Northern long-eared bat, Eastern small-footed bat, and Tri-colored bat – hibernate during Maine’s winter months. The remaining three species – Eastern red bat, Silver-haired bat, and Hoary bat – are often referred to as tree bats and migrate south for the winter. WNS was first observed in 2010. Since then, populations of all five hibernating species in Maine have been profoundly affected by WNS.

Our own research on the seasonal presence of bats in Maine began in 2004 and involved use of specialized acoustic recording equipment that enabled remote, site-specific, and time-stamped collection of individual bat echolocations on a 24/7 basis. A subsequent analysis of sonograms from the echolocation recordings was then used to identify each call by species. The collection of these data was accomplished by deploying battery operated acoustic detectors in targeted, often remote, habitats across much of the northeast, as well as coastal offshore locations, with each detector unit continuously recording calls over long-term seasonal periods. The date and time of each individual recording was included with the call data, enabling a subsequent analysis that – when viewed in context with multiples of other units deployed in a wide variety of habitats – began to provide a telling tale of the activities of our nocturnal neighbors. Even more telling and powerful was the same analysis and data comparisons when compared with recorded weather variables such as temperature, wind speed/ direction collected at the time of each call. The accumulation of these data ultimately resulted in an assemblage of tens of thousands of individual data points over the course of a single year, enabling a better understanding of activity trends of individual species over the course of a single night, season, or even year.

The recent influence of WNS on Maine bat populations has been sobering. An analysis of species occurrence from 2004 to the present clearly depicts a dramatic population decline of Maine’s non-hibernating species. Where formerly the Little brown bat was the most common bat species across the northeast landscape, it is now virtually absent. At the same time, our data reveal that the formerly common – but by no means dominant – Big brown bat is now a dominant species, despite the fact each occupies a different ecological niche. Whether such a fundamental shift in species composition has been due to the Big brown’s ability to expand into a habitat previously occupied by Little brown bats, or whether it’s because of a loss or shifting of insect prey due to climate change or increased pesticides, remains unknown. As importantly, the ecological effects of such a consequential shift and the almost total loss of one of the most common residents of the nocturnal landscape, has not yet even begun to be understood.

A better understanding and respect of the habits and resource needs of our night time friends will go a long way towards helping to turn around the ongoing population declines. More information regarding the habits and habitats of Maine’s bats, as well as those of species around the world, and how we might best conserve these species, can be found at www.batcon.org.

You can also check out this great video from Maine Fish & Wildlife:

Remember to Wear Orange on the Trails!

BTLT In the News: “Intertidal: ‘Fisheries in Our Town’ highlights...
Scroll to top
Translate »