The day after the recent prescribed burn on the sandplain-grassland blueberry barren at Crystal Spring Farm, I walked the burned field, admiring the precise scope and geometrics of the burn and looking at the little stories that remained. The sooty surface had taken on a gray burnish, and, when I picked some up, it disintegrated into the finest ash, which even the light wind blew away. The last sector burned was laced with tire tracks, both from a Forest Service ATV and Brunswick’s Brush 1 tanker-truck, and they told a tale of the post-burn checking over for any remaining hot spots. A few old stumps had been broken up and scattered, and I recalled watching one of them smolder during the mid-afternoon pause in the burn. In the northeast corner, you could see the patch, where the fire had made its run at jumping to the woods, a run that had barely blackened the ground-leaves before it had been extinguished.

The blackened sandplain grassland was ready for rain and the regrowth that will come to its native plants.

Why Fire a Field?

Fire fascinates; it is one of our oldest friends, and, like all friends, it bears watching. Subject of myth and story, and one apocalyptic prediction of our story’s end, we gaze at and into it; we know not to turn our backs to it. Now, after centuries of suppression, increasingly, we are inviting fire back into the stories and ecologies of our wood and wildlands. In doing so, we are returning traditional wisdom.

For the now rare sandplain-grasslands of our area, fire issues a recurring invitation to their plant and animal communities. Without it (and complementary cuttings), those flat, sandy lands would go over to forest and their sedges and grasses and blueberry barrens would be lost. Not to mention two threatened butterflies and some unusual birds that make summer homes in those plains.

In southern Maine, these plains atop glacial outwash sands were once common. But reversion to forest and ease of developing these flatlands have each taken over large chunks, to the point where such a sandplain-grassland is classed as S1, most imperiled. Though only a handful exist in our state, the Brunswick area is rich in them. In addition to the plains of Crystal Spring, there are prime examples at Captain Fitzgerald Park and in the Sawtooth Parcel near the runway at the old Naval Air Station, now the Landing.

Working with fire such as April 8th’s burn struck me as kin to being in relationship with a semi-domestic animal, say a favorite dog. Those of us smitten with dogs train them; we want them to be able to both live with us and be themselves, which means being in the presence of other people without incident. It offers little comfort, for example, when someone’s dog bounds toward me after calls to “come back,” and I hear, “Don’t worry, Ralph’s friendly.” I know dogs well enough to distrust this. I am, after all a stranger who doesn’t feed Ralph; who knows what he thinks of me? And he is, after all, still mostly wild, even after millennia of domestication. That’s as it should be. But it also means that Ralph shouldn’t be off lead unless he’s impeccably trained. Training a dog is not breaking a dog, after all. Or it shouldn’t be.

The same’s true of prescribed fire set as a friend to a field to be burned. We don’t want a fire to go completely wild, of course, but we do want its wild flames to burn brightly within the bounds set. Watching Maine Forest Service Burn Boss Aliesha Black and Brunswick Fire Chief Ken Brillant and their crew work with this recent sand-plain burn did give me the feel of seeing a fine and wild animal free within wet-bounds that also kept the surrounding woods and communities safe.

A friend who knows dogs over a lifetime calls himself their human companion. Black and Brillant and their crew convinced me I was seeing fire’s human companions. 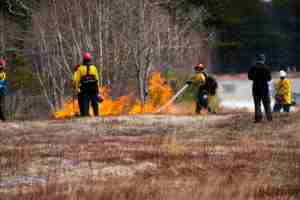 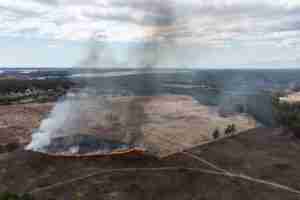 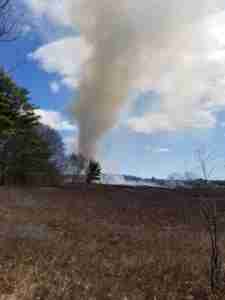 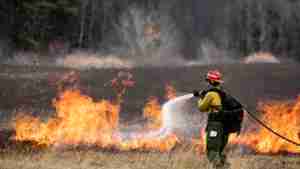