The Cathance, likely meaning “crooked river” in Abenaki, has a twenty-mile, roaming route through Bowdoin, Topsham, and Bowdoinham. Native Americans once utilized the land in this area for its bountiful resources, shelter, and waterways, and early European settlers also recognized and took advantage of the diverse resources along the river. Today, the river continues to offer many opportunities for visitors to immerse themselves in the rich natural resources and beauty of the region.

The Abenaki people lived in the Topsham area for over 12,000 years, and had a culture that was deeply rooted in the natural resources. They used birch bark to build canoes and shelters, and enjoyed many of the abundant wild edible plants in this region. Like the natural features of this region, these communities were impacted and displaced by European colonization. Today, their culture and history live on through their descendants in the present-day Wabanaki nations.

For a relatively short river, the Cathance provides a wide range of paddling experiences.

The upper section of the river is an easy, flatwater paddle good for families or groups looking for a relaxing excursion into the natural beauty of the region. Most people launch at a small pull off on Route 201 near Meadow Road in Topsham, and paddle up stream to Bradley Pond, then float back downstream. On this section, wildlife is abundant, including heron, beaver, muskrat, and turtle.

The 2.5 mile middle section of the Cathance is “a gorgeous class III-IV creek run” according to American Whitewater but should only be attempted by seasoned paddlers who are  “stout of heart”. Below the head of tide, the river widens and paddlers can enjoy miles of grassy and forested wetlands and observe birds ranging from osprey and eagle to migratory duck and wading birds.

Below the head of tide, the river widens and paddlers can enjoy miles of grassy and forested wetlands and observe birds ranging from osprey and eagle to migratory duck and wading birds. In this tidal section between Head of Tide Park and Philip Mailly Park in downtown Bowdoinham, paddlers must be cautious of the tides as the current associated with tidal movement can be strong in the river. 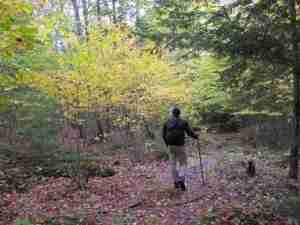 There are over 8 miles of public hiking trails between the river’s headwaters in Bradley Pond and Head of Tide Park. Just a few miles from the busy downtowns of Brunswick and Topsham, these trails lead visitors through the hush of deep woods, along active farm fields at Bradley Pond farm, through a unique 30-acre heath in the Cathance River Nature Preserve, and provide views of the pristine Cathance.

The fishing opportunities along the river are amazingly diverse, ranging from uncommon-for-the-region trout fishing above Bradley Pond, to commercial elvers (Fisherman photo) in the tidal sections, and a wide range of sport fish near Merrymeeting Bay and up to Head of Tide.

Alewife were once abundant and caught by the thousands near Head of Tide, until pollution reduced the population significantly. Since the removal of an overboard discharge at this site in (2013) the alewife population has rebounded significantly, and the fish are now common below the falls.

Striper are known to come up the Cathance as far as Head of Tide. Shad are occasionally found here, as are salmon and sturgeon, though these are now protected by law. White and yellow perch are very common, and European carp were introduced late in the 19th century and are thriving.

In late fall, smelt enter the Bay, and remain until well into the spring. Once the ice is solid villages of smelt shacks appear along the Cathance in Bowdoinham. 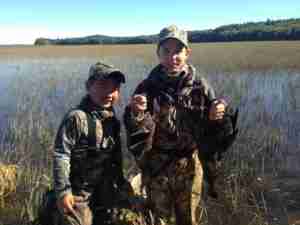 While there are certainly significant opportunities for hunting game in the forests and fields along the Cathance, this area is probably best known for its duck hunting – primarily mallards, teal and black duck, with some wood duck, and pintail. The waterfowl of the waters and tributaries of Merrymeeting Bay have been a key resource for people for over a thousand years – the Abenaki name for Merrymeeting Bay was Quabacook – duck watering place. There are local residents who still remember flocks of ducks 50 years ago that took 20 minutes to fly overhead. Although migratory waterfowl populations are significantly lower than what they were even 50 years ago, the Bay is still considered the largest fall staging ground north of the Chesapeake for migratory ducks.