The Brunswick–Topsham Land Trust Farmers’ Market will be making its second move of the season.

From September 26th– October 31st it will be located on Brunswick Landing in the parking lot off Pegasus Street shared by the REAL School, Flight Deck Brewing and soon to be Wild Oats at their new location: the address is 11 Atlantic Ave.

“We saw this as an opportunity to temporarily host the market near our new offices on Brunswick Landing, and contribute to develop the Landing as a community space” says Angela Twitchell, Executive Director of the Land Trust.  The Land Trust reached out to TBW, LLC, Flight Deck Brewing, Wild Oats and The REAL School about the possibility of using the lot they share and everyone was enthusiastic.  “We are excited to welcome one of the largest farmers’ markets in the state of Maine to Brunswick Landing. Showcasing our growing neighborhood in the town of Brunswick to the thousands of people who take advantage of the market each week is an enormous opportunity, and we are grateful for the Brunswick–Topsham Land Trust’s leadership” says Nate Wildes, Managing Partner of Flight Deck Brewing.  Wild Oats is similarly looking forward to more people coming to The Landing, “ while we won’t be moving to Brunswick Landing until late 2020, we are excited people will get a glimpse of our new building and experience the vibrant Brunswick Landing community” says Marshall Shepard of Wild Oats.

While moving the market twice in one season isn’t ideal, and can be confusing for customers, it has been necessary to keep everyone safe during the pandemic.  The location on Brunswick Landing allows for distancing between vendors and customers, and abundant parking around the market area.  “We are fortunate to have such amazing vendors at our market” says Jacqui Koopman, Market Manager for the Land Trust “they have been very understanding as we have worked to make the Market safe this season”. 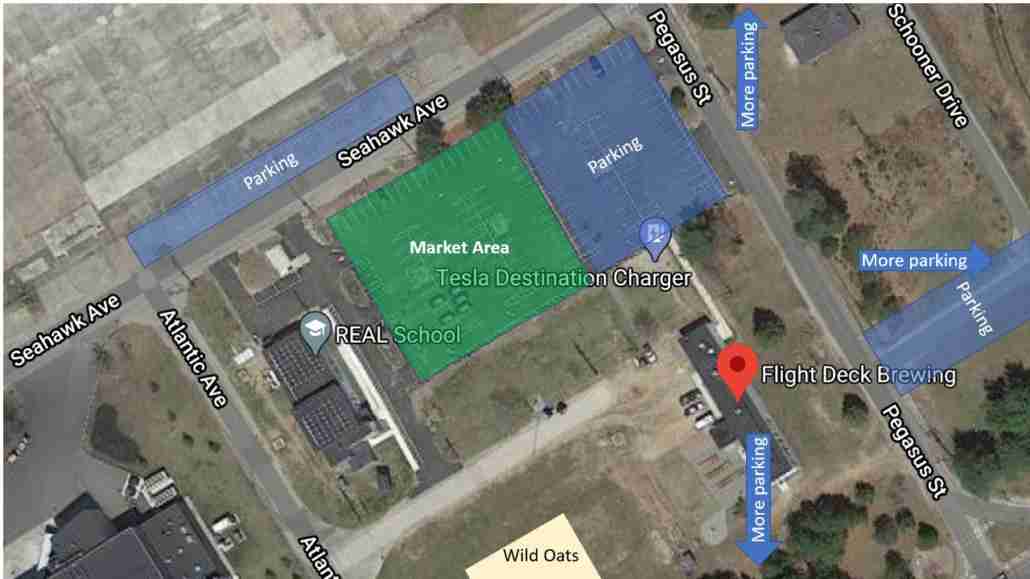 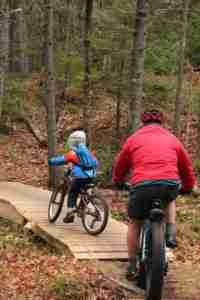 Kris Haralson and Alex Long are passionate about riding mountain bikes, but they are also passionate about engaging the next generation (or really anyone who is interested) in riding bikes. Kris and Al have been riding the technical mountain bike trails in the Bath area for years, but they saw that those who are new to mountain biking needed a place to ride too – and they wanted that place to be closer to home, right here in Brunswick. The two are a strong team – Kris with endless will and patience for community advocacy, Alex with truly impressive trail design and build techniques, and both with a willingness and ability to put in long hours in the woods building trail.

Without their efforts, the trails at Neptune Woods would have likely never been created. We are truly grateful for all of the time they have invested in this project and in engaging youth in riding their bikes. Thank you, Kris and Al, for your passion, dedication, skill, and hard work. We look forward to partnering on many more trails in our community!

“I advocate on behalf of the mountain bike community and other trail users for increased access to trails in the Brunswick area from a connectivity as well as a recreational standpoint. I am passionate about trail cycling and the overall health benefits it offers, as well as having others enjoy the trails we are creating for the community.” – Kris Haralson

“Trail building is my way of giving back to a sport that has provided my family and me with much happiness over the years.  Designing and building trails is a small part of how I strive to leave this world a better place for the next generation. The Neptune Woods project specifically is a collaborative first step in building a new interconnected network of trails for all levels of mountain bikers in the Brunswick area.” – Alex Long

“The Legislature’s Agriculture, Conservation and Forestry Committee has been studying Maine land trusts since October. As leaders of the Maine Land Trust Network, we welcome the study and the chance to highlight the many ways we make Maine “the way life should be.”

Last summer, the Maine Land Trust Network surveyed our members and published the findings in a report titled “Land Trusts Work for Maine.” This report highlights the most important benefits that land trusts contribute to our local communities and to the state. For example, hikers can explore more than 1,250 miles of trails that wind through land trust properties in every corner of Maine. These range from family-friendly nature paths in communities like Freeport, to more challenging routes ending atop bald summits in rural corners of Oxford County, and everything in between. Motorized recreational enthusiasts also benefit from Maine’s statewide collection of land trust conserved lands, which are home to over 345 miles of ATV trails and 570 miles of snowmobile trails.”