The beekeeper lost most of his hives over the winter and had recently installed new ‘package’ bees in several of his hives.  (A ‘package’ is 2 – 4 pounds of worker bees and one queen, delivered in the spring to start a new hive.)  It is common practice to feed sugar water to bees in the spring, to help the hive get established while weather is cool (making it hard for the bees to get out to forage for food) and food sources (flowers) are in short supply. The unknown attacker was removing sugar water containers from the hives and discarding them nearby.  The containers are screwed into a base located at the entrance to the hive, so their removal requires some dexterity.  This seemed to rule out most wildlife.

Everyone was mystified. We all disliked the possibility that a person might be vandalizing the hives. And vandalizing beehives seemed extremely bold or extremely foolhardy. Who was the culprit?

We made a quick call to The Nature Conservancy which graciously loaned us their game camera. We set the camera to photograph in response to motion, and asked Seth to notify us when the next disturbance had occurred.  It didn’t take long. The beekeeper replenished the sugar water the next day and the containers were ransacked almost immediately.

We retrieved the camera and downloaded the pictures.  There were hundreds of pictures of waving branches (thanks to those windy days we’ve been having) and a few of the beekeeper or tractor passing by.  No daytime marauders.  But the night pictures (which are black and white and somewhat out of focus) were most intriguing. Many revealed a dim rounded form near the hives that was clearly an animal.  Identification was difficult until we found the picture below, which clinched the identity of the marauders – do you see the two thieves?  Clever little rascals – capable of unscrewing a mason jar from its base and cagey enough to wear their masks in case they got caught!

We reported our findings to Seth and the beekeeper who now have the challenge of outsmarting the raccoon family.  The beekeeper has removed the sugar water which he was  providing to ease the bees’ work as they build honeycomb. He will likely install some kind of prickly board around the hive (e.g. a board with exposed nails sticking up) to deter future forays by our masked marauders.

Watch where you step this time of year!

Spring is certainly a time of new growth for many species. On a walk today at Crystal Spring Farm to evaluate the status of a couple species of rare grassland sedges that grow there, a nest was found. Can you find it in this photo? 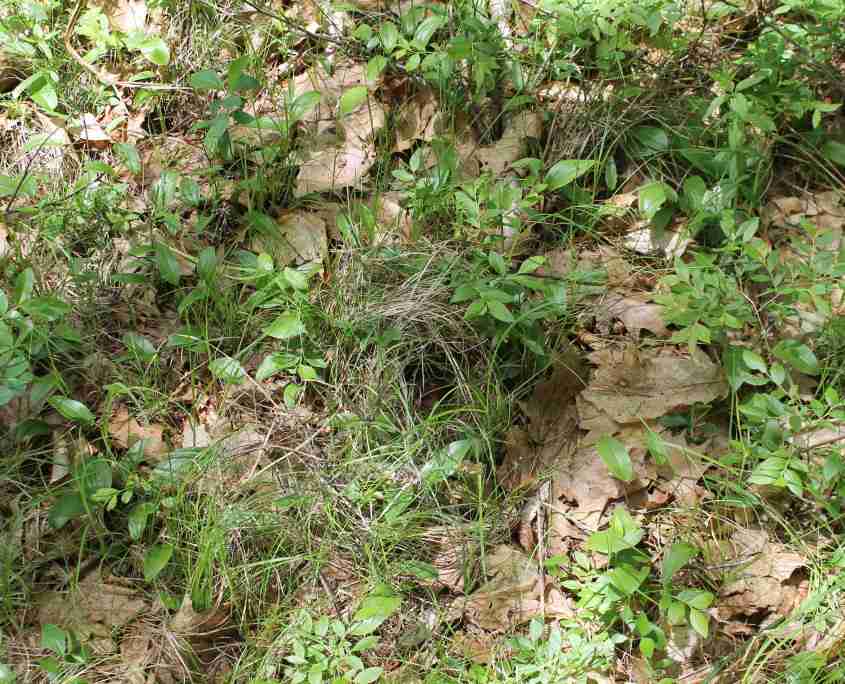 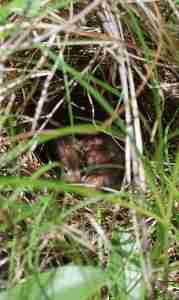 Take a look at these close ups. It is a little easier to pick out the tiny nestlings in their amazingly camouflaged nest.

The bird has a fitting name – Ovenbird – because of its outdoor oven-like nesting strategy. Ovenbirds are a species of warbler who nest and spend much of their time on the forest floor. They have a loud song that many describe as sounding like “teacher-teacher-teacher”.

The distinctive rising trill of another warbler species, the prairie warbler, was also heard today and a male indigo bunting gave us some good looks and songs. Lots of great bird action today in the blueberry fields at Crystal Spring Farm.

Let us know what you’re seeing on BTLT properties and in your backyard!