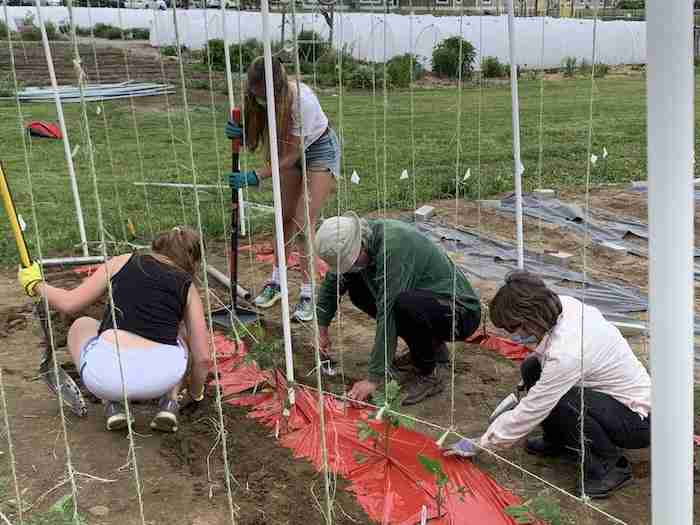 Researchers at Clemson University report that red “mulch” has a measurable impact on tomato plant productivity. Red “mulch” reflects sunlight back onto the tomato plant amplifying the green light spectrum. Amplifying the green light spectrum encourages tomato plants to grow leaves faster and in turn provides an earlier and larger fruit crop. The light reflected onto the plant triggers the release of a specific plant protein. This protein causes the crop yield to increase and reportedly makes the tomatoes even more delicious. 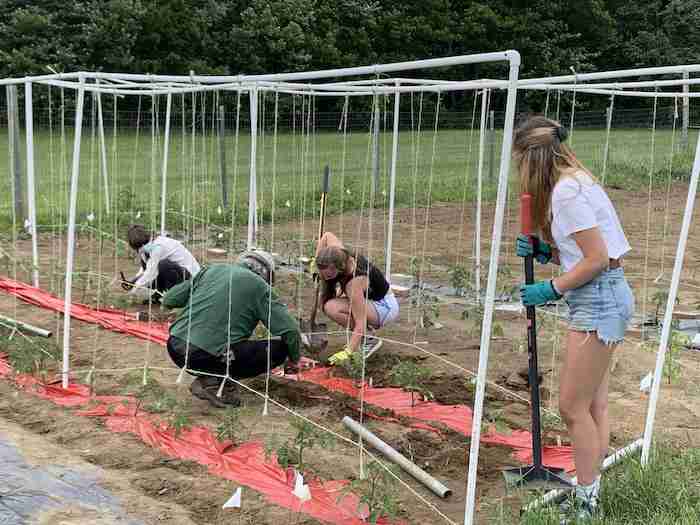 Mulch has the added benefits of suppressing weeds that compete with plants for nutrients, creating a warmer soil environment and increasing water retention decreasing the need for frequent watering. To test the impact of red “mulch”, the volunteers have one row of tomatoes set up using black plastic cover.  This row will serve as our control group in this experiment. Next time you are at the TSCG, drop by and take a look at the red “mulch” experiment.

Lily Hatrick is a rising junior at Brunswick High School (BHS).  In April she joined the team of volunteers that farm the Common Good Garden at TSCG.  Lily and Dev are working together to develop Lily’s volunteer time into an experiential learning program supported by BHS.

To keep our community members safe:

Sun Gold Tomato- “there is no summer without Sun Golds”- a spectacular tasting cherry tomato.

All seeds from FEDCO- raised organically

END_OF_DOCUMENT_TOKEN_TO_BE_REPLACED

“Etiquette is always important in communal spaces. For community gardeners in years past, being considerate of others meant keeping your bed neat, treating communal tools with care, chatting with fellow gardeners about their summer plans and resisting the urge to snatch a tomato from your neighbor’s plot.

As the COVID-19 pandemic continues, though, the rules for being a good garden bed neighbor have changed. Community gardens across the state have established new rules for the growing season in accordance with the governor’s orders, the Centers for Disease Control’s recommendations and the University of Maine Cooperative Extension guidelines.

“Garden guidelines provide a framework for people with different experiences and viewpoints to work within a community space respectfully,” Jamie Pacheco, program manager at the Brunswick Topsham Land Trust, which runs the Thomas Settlemire Community Garden.

If you are wondering what the best practice is, the first step is to check the rules for your community garden. Keep abreast of any changes that the garden might make over the course of the crisis.”

Click here to read the rest of the article!