Due to rapidly changing conditions and recommendations from local, state and federal agencies regarding COVID-19, we are postponing all of our community programs and activities through the end of April. The health and safety of our staff, volunteers, and community are our primary concerns and we hope to help limit the spread of COVID-19 through these measures.

Towards that end, we want to share some additional changes we have made during these difficult times:

As you know, the COVID-19 situation changes daily and the Land Trust is working to adapt and respond as needed. We will keep you updated on these changes as they come and thank you in advance for your patience and flexibility during these unprecedented times.

In the meantime, we will keep doing what we do best: conserving and caring for land in the Brunswick-Topsham area and connecting all of you to our incredible natural resources. In these anxiety-provoking times, we will strive to support our community by sharing resources and opportunities for getting out into nature and encouraging ways to find comfort and relief while practicing safe social distancing. BTLT maintains 23 miles of trails on the more than 2,900 acres of land we have conserved, and we encourage you to make use of them, especially now, when so many other recreational opportunities are unavailable. Follow this link to find out more about our trails: https://www.btlt.org/conserved-lands/trail-connections/ .

END_OF_DOCUMENT_TOKEN_TO_BE_REPLACED

Join BTLT and our conservation neighbors again this year for the Spring Birding Extravaganza! 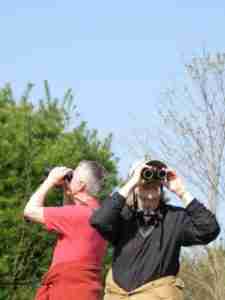 Birders of all ages and experience levels are invited to take part in the seventh annual Birding Extravaganza, a free series of birding events sponsored by four conservation organizations in Midcoast Maine. Merrymeeting Audubon (MMA), Kennebec Estuary Land Trust, Harpswell Heritage Land Trust, and Brunswick-Topsham Land Trust have collaborated to offer opportunities to watch for and learn about a wide range of birds, both seasonal migrants and permanent residents.

The series is a way to encourage community members to enjoy and learn about the our beautiful natural areas and introduces folks to all of the land trusts’ preserves and trails. The protected areas of the three land trusts cover thirteen towns in a region known as a global hotspot for migratory birds.

“The land trusts work hard to provide a variety of trails for the public to experience the natural wonder of our region. It’s thrilling to showcase these special outdoor places by birding with people of all ages,” said Carrie Kinne, Executive Director of the Kennebec Estuary Land Trust,

“The series gives the perfect excuse to visit and experience a new outdoor place not so far from home.”

“Every year this series is an absolute favorite with our community,” said Lee Cataldo, Outreach and Education Coordinator at Brunswick-Topsham Land Trust. “We truly love this partnership with the neighboring land trusts and MMA. It is such a great way to bring folks from all over the region to new trails and properties, and to get to see some of the amazing migratory birds that pass through the Midcoast.”

This year, we will offer Maine Bird Atlas training, a movie screening, bird walks throughout the area, and more!  These walks are accessible to many, including outings for experienced and novice birders, families and those unable to walk great distances.

All events are free and open to the public. You can visit the websites of the four hosting organizations for more information on these terrific treks to observe our feathered friends.

END_OF_DOCUMENT_TOKEN_TO_BE_REPLACED

Brunswick-Topsham Land Trust is so excited to be working with Friends of Cross-Country Skiing (FOXCS) who are focused on improving trails and information about cross-country skiing to our community.

For years, Nordic skiing options around campus have been slim. Students looking for groomed trails could either drive half an hour to Pineland Farms in New Gloucester, where Bowdoin’s varsity team practices, or try their luck at a few groomed snowmobile trails slightly closer to campus. But, in the past few months, Friends of Cross-Country Skiing (FOXCS), a local community-based organization acting as an arm of the Brunswick-Topsham Land Trust, has been advocating for improved recreational Nordic skiing facilities right here in town—and the group has been rapidly gaining support.

Before FOXCS, the recreational Nordic skiing community in the Brunswick-Topsham area was not formalized and was limited in its scope. Although residents have made efforts to improve local conditions, there was no formal movement to petition for more trails in town and build a sense of community amongst local skiers.

“There [were] definitely a lot of people who [had] been thinking about [forming a group] for years,” said Bowdoin Nordic skiing Head Coach Nathan Alsobrook, who has been involved with FOXCS from the beginning. “Now [that] we’re starting to talk about this and coordinate more, [we’re attracting people] who might not have known anything about this previously.”

The inspiration for FOXCS came from the confluence of a number of factors. Earlier this winter, Brunswick’s Mere Creek Golf Club, a popular spot for local skiers, decided to stop allowing use of its property for skiing. Even though there was no real formalized community of recreational skiers, the backlash to Mere Creek’s decision was strong.

“People got really upset, and they wrote to the Town Council,” said Kathy Thorson, a nurse practitioner at the Bowdoin Health Center and an executive committee member of FOXCS. “The town councillors said, ‘We have never, ever had so many people come and talk to us about any issue.’”

The energetic community action in support of cross-country skiing came at the perfect moment for Thorson, who had been thinking about how to start a more formalized skiing community in town.

“We happen to be sort of positioned perfectly to go, ‘Oh, look at all these people that are interested in cross country skiing!’ And they would all say, ‘I wrote to my town councilor, because I’m really upset.’ And then I would be able to write back and say, ‘Hi, there’s this new group!’” said Thorson.

The final phase of the group’s evolution came when it became officially affiliated with the Brunswick-Topsham Land Trust (BTLT), a local nonprofit, at the end of last year.

“[We] fit exactly with their mission,” said Thorson. “So they actually turned to us really early on. We went to the Land Trust and said, ‘What do you think?’ And they said, ‘Oh, you’re perfect. We’ve been wanting to do something like this for so long’ …  and so we became an advisory group.”