“Brunswick solar array could be model for others in future”

On Wednesday, October 17, the key individuals involved in the Crystal Spring Farm Community Solar Project, representatives from the Town of Brunswick and ReVision Energy, as well as local politicians gathered to celebrate the project that provides about 100,000 kilowatt-hours of energy per year to Crystal Spring Farm plus seven other Brunswick families without access to solar electricity where they live.

Everyone enjoys a bright, sunny day, but for the folks at Crystal Spring Farm and their solar array, a little bit of sunshine is that much sweeter.

The 78.6-kilowatt photovoltaic solar energy installation has been online at the Brunswick farm for almost two years, producing, on average, 100,000 kilowatt-hours of clean energy every year, according to Steve Weems, one of the project’s leaders.

Along with other community members, Crystal Spring Farm and the Brunswick Topsham Land Trust, which owns the land the farm is on, partnered with ReVision Energy to establish a net metering agreement in which each participant gets a kWh credit on their electric bill each month. Crystal Spring Farm owns 44 percent of the share, and the other eight participants split the remainder.

Weems; farm owner Seth Kroeck; Angela Twitchell, executive director of the BTLT; and some of the participating families and local politicians gathered at the solar array Wednesday evening for a small celebration marking two years of solar power in the community.

When the conversation concerning a solar array first began, Kroeck said there was initial worry from the community that the array, which covers a half acre of pasture, would be too “ugly.”

However, he argued that people should shift their perceptions of beauty. Gesturing to the silo behind him, he said that while the silo was perhaps not a particularly attractive building, it is what people think of when they think of a farm. This, too, should be the case with the array, he said, adding that “it’s part of the iconography of a modern farm.”

BTLT in the News, "These little doggies will not be going to market" 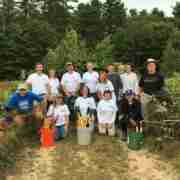 BTLT in the News, "Town agrees to help fund conservation of Woodward Point"

BTLT in the News, "Land trusts working to preserve 300 years of open space conservation in Brunswick despite push for development" 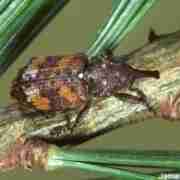 BTLT in the News, “New bike club wants to expand opportunities for ri...