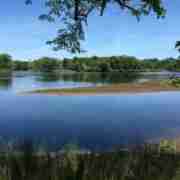 “On Jan. 1, Brunswick took ownership of a “spectacular” piece of land it had sought for decades. Now, town officials envision a future for the historic property.

Walking trails. Live entertainment. A dance pavilion over the Androscoggin.

At the turn of the 19th century, thousands of people from cities around the Northeast flocked to Brunswick’s Merrymeeting Park for weekend entertainment, said Tom Farrell, the town’s director of parks and recreation.

Now, after pursuing the land for decades, Brunswick has finally completed the purchase of a 42.5-acre parcel of the former park for conservation. And while it will take time and money to complete the next phase of the project, Farrell said, the town hopes to restore and commemorate many of the area’s historical features.

“This is one of the most significant parcels for protection that the town could have ever hoped to preserve,” said Farrell of the land, which is accessible only by boat, bike or foot from the Androscoggin River Bicycle Path near Route 1. “It’s a spectacular piece of property that most people have never been able to access.”

Brunswick had been after the land since before David Watson joined the town council in 2002. Numerous attempts to buy the property from the Ormsby family stalled over the years, before a team including town councilors, members of local organizations and an attorney successfully negotiated a purchase agreement last summer, Watson said.

“It was just a beautiful operation,” said Watson, who initially noted the land’s beauty during his career as a Brunswick Police officer. “Overall the team here was wonderful.”

The town officially took control of the property on Jan. 1, Farrell said. Despite the land’s $507,500 price tag, Brunswick paid only $75,911 thanks to numerous grants from sources including the Land for Maine’s Future Program, the Maine Coast Heritage Trust and the Maine Community Foundation Land Protection Grant Program.

Brunswick-Topsham Land Trust Director Angela Twitchell credited Watson and Farrell for keeping the idea alive for decades, noting the land is “important to the people of Brunswick.” Twitchell, whose organization helped the Brunswick team strategize a purchase plan for the land, said the benefits of conservation are many, including protecting plant and animal habitats and preserving local history. But just as important, she added, was expanding the public’s access to nature.” 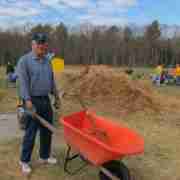 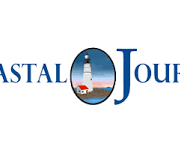 BTLT in the News, "Head of Tide Park connects Topsham to river’s offerings"

BTLT In the News: "Conservation project preserves land and a father’s memory"

Big Thanks to Our Members and Partners!