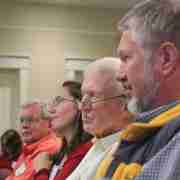 The Brunswick-Topsham Land Trust held its annual meeting on Tuesday July 23rd at the Topsham-Public Library. The meeting was well-attended as there was much to celebrate! This year marks the Land Trust’s 30th anniversary, and June 30th marks the end of the “Strengthening Our Community Through Conservation” capital campaign. 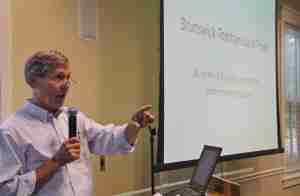 Board member Tom Settlemire described the role that the Brunswick-Topsham Land Trust has played in this community-centric conservation movement during the last thirty years. What started as preservation of a meadow has evolved into an organization that protects and stewards thousands of acres, is supported by more than 1000 member-households, and fosters continued appreciation of the natural environment and land-based culture through many programs and events (50 in 2014!) 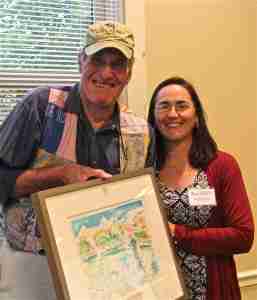 Founding board member and former Executive Director Jack Aley was honored with a plaque, a painting, and a conference room named after him in appreciation of his efforts during the first two decades of the Land Trust.

Treasurer Mary Johnson provided details of the Land Trust’s financial situation, summarized as “The organization is financially healthy and growing.”  Jerry Galleher presented the Nominating Committee’s recommendations, and five board members (whose terms were expiring) were reelected. There were no changes to the Executive Committee.

We would like to express a heartfelt “Thank you!” to all who attended the meeting, to Jay Espy for an informative and inspiring speech, and to all who made this last year – and indeed the last thirty years – so successful.

In the news: Congolese gardener puts down roots in Brunswick
Scroll to top
Translate »